The Weekender: Lead me not into ‘Temptation’

G.I. Joe: Retaliation (PG-13)
Starring Channing Tatum, The Rock, Bruce Willis
Screenplay by Rhett Reese & Paul Wernick
Directed by Jon M. Chu
Why have Bruce Willis and The Rock never teamed up before? At their best, they represent Big Dumb Fun Movies the way they’re meant to be made. I clearly hope that this film retains that spirit, even after contentious reshoots. (Rumor has it Paramount decided to un-kill Channing Tatum’s character and give him a bigger part after it saw how much his star rose in 2012. Their official stance is they wanted to convert it to 3-D. Either reason is stupid.)

The Host (PG-13)
Starring Saoirse Ronan, Diane Kruger, William Hurt
Written for the screen and directed by Andrew Niccol
What Stephenie Meyer has done to literature and now cinema over the past decade is frankly unforgivable. I had a little sliver of hope that Niccol, writer of two of the best screenplays of the ’90s, could improve on her grade school-level prose. Instead, he lowers himself to the occasion in an annoying, boring adventure. There’s an interesting premise to be explored, along with themes of free will and identity, but the movie’s far more interested in Which of these cute boys should I kiss? Read my review at College Movie Review.

Tyler Perry’s Temptation (PG-13)
Starring Jurnee Smollett-Bell, Vanessa Williams, Brandy Norwood
Written and directed by Tyler Perry
This is that Tyler Perry movie with Kim Kardashian in it. That’s all you need to know.

Beyond the Hills (NR)
Starring Cosmina Stratan, Christina Flutur, Valeriu Andriuta
Written for the screen and directed by Cristian Mungiu
Romanian’s official Oscar entry from last year makes its way stateside. The story, about two lifelong friends and the divergent paths they took, couldn’t be more Eastern European if it tried. Yawn. But apparently it’s also based on a real-life exorcism-gone-wrong case, so it should be intriguing to say the least.
PLAYING EXCLUSIVELY AT THE MAGNOLIA 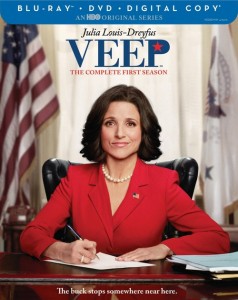 Veep (Season 1)
Julia Louis-Dreyfus returns to TV in a comedy finally worthy of her talents. Armando Iannucci brings his formidable wit across the pond for this political satire reminiscent of his brilliant series The Thick of It. The entire cast, including Anna Chlumsky (My Girl), Tony Hale (Arrested Development) and Matt Walsh (guest starring on all your favorite shows) is brilliant, but the real winner here is Timothy Simons as the eternally creepy presidential aide Jonah Ryan. This was one of the best series on TV last year and I can’t wait for season two to start soon.

Blu-ray: American Son, Beautiful Girls, Benefit of the Doubt, Bounty Hunters, The Devil and Miss Jones, Down to You, From Beyond, Futureworld, Immortality, Ironweed, The Lawless Nineties, Little Fugitive, Marvin’s Room, McLintock!, Music of the Heart, Panic in the Streets, Phantasm II, Playing by Heart, Ruthless, Senseless, The Shipping News, The Sun Shines Bright, Westward Ho