The Weekender: The Wrongs of ‘Spring’

Admission (PG-13)
Starring Tina Fey, Paul Rudd, Wallace Shawn
Written for the screen by Karen Croner
Directed by Paul Weitz
Despite the always charming duo and the director (who’s great at these middle-of-the-road dramedies), this looks like a rare misfire for Fey, who plays a Princeton admissions officer who meets a bright applicant who might be her illegitimate son. There’s a deeper, darker movie lurking somewhere in there, but I don’t think it will show itself. The novel might have done well in book-clubs, but it won’t do well at the box office.

Olympus Has Fallen (R)
Starring Gerard Butler, Aaron Eckhart, Morgan Freeman
Written by Creighton Rothenberger & Katrin Benedict
Directed by Antoine Fuqua
One of two White House-invasion movies this year (the latter will be this summer’s White House Down), this one looks as generic as they come. As veterans of The Dark Knight, Eckhart (Battle: Los Angeles) and Freeman (Wanted) really need to start using discretion when they pick their action movies.

On the Road (R)
Starring Sam Riley, Garrett Hedlund, Kristen Stewart
Written for the screen by Jose Rivera
Directed by Walter Salles
An adaptation of one of the most beloved novels of all time (and a Palme d’Or nominee) should have gotten a bigger release than poorly marketed awards consideration dump this one got in the U.S. last year. It’s finally expanding and you can judge for yourself how it fails lives up to one of the most important pieces of literature ever written (somewhere between modestly and utterly, depending on your affinity for Kerouac).
PLAYING AT THE ANGELIKA PLANO and THE MAGNOLIA

inAPPropriate Comedy (R)
Starring Adrien Brody, Lindsay Lohan, Michelle Rodriguez
Directed by Vince Offer
As one of the few defenders of the often very funny Movie 43, I imagine this one deserves all the insults that the star-studded affair received. Plus, this one’s directed by the ShamWow guy (no, really).
PLAYING AT THE AMC VALLEY VIEW and AMC GRAPEVINE MILLS 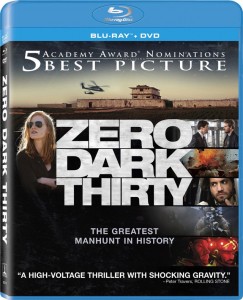 Zero Dark Thirty (93%)
You know it’s a great year for film when the year’s second-best picture only walks away with one Oscar (and a tie at that). A taut thriller with murky ambiguity, ZDT is the astonishing feat of two women who have never been better: director Kathryn Bigelow and star Jessica Chastain. Only the latter was an Oscar nominee, but like the similarly difficult The Master, this one will be studied for years to come, and not just about whether or not it “condones torture.”

To buy:
Music: Love for Levon

Criterion: Badlands, The Life and Death of Colonel Blimp