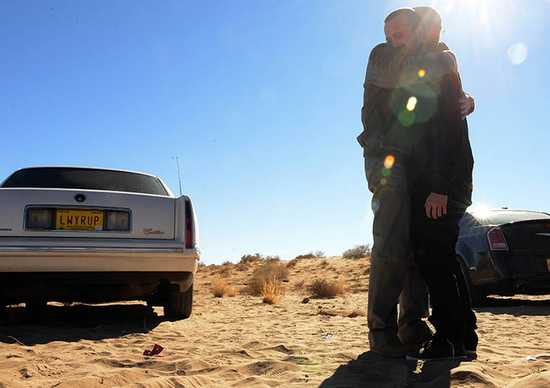 Hug it out, bitch.

Only Breaking Bad could take things from bad to worse and still find a way to make it thrilling. Dread and excitement collide so well in this show.

And there’s always a new reason to hate Walt’s cancer-filled guts. Now he’s using Flynn as a way to shield himself from Hank and Marie and, in an epic display of evil genius, pinned the entire Heisenberg operation on his brother-in-law. Even without the video, Hank’s done for now that he knows the Whites paid for his rehab. The only justice left will be delivered by violence.

Which is exactly how Jesse reacts once he stops accepting Walt’s B.S. “Just tell me you need this!” he yells, long before he ever realizes how deep the deception goes. (And with that, Aaron Paul has locked up yet another Emmy.) But once he has his own eureka moment, there’s hell to pay for anyone who helped destroy his life, starting with Saul.

It just spills out from there, as another marvelous episode ended with Jesse dousing the White home in gasoline. Like everything and everyone in this show, it’s getting torched. But thanks to everyone doing their best work yet, it’s a beautiful flame.