Closed Circuit (R)
Starring Eric Bana, Rebecca Hall, Jim Broadbent
Written by Steven Knight
Directed by John Crowley
Though it’s being advertised as a more high-minded drama like Tinker Tailor Soldier Spy, it looks more like an average spy thriller. Otherwise, it would be opening in the fall.

Austenland (PG-13)
Starring Keri Russell, Jennifer Coolidge, Bret McKenzie
Written for the screen by Jerusha Hess & Shannon Hale
Directed by Jerusha Hess
My love for Keri Russell knows no bounds, but it’ll be interesting to see if Jerusha Hess can follow in her husband’s footsteps and make a crossover hit like Napoleon Dynamite.
PLAYING AT ANGELIKA PLANO and THE MAGNOLIA

The Hunt (R)
Starring Mads Mikkelsen, Thomas Bo Larsen, Annika Wedderkopp
Written by Tobias Lindholm & Thomas Vinterberg
Directed by Thomas Vinterberg
Mads Mikkelsen is giving the best performance on network TV (not meant to be an insult) as Hannibal Lecter. He’s supposedly even better in this devastating drama as a kindergarten teacher wrongfully accused of molesting a student.
PLAYING AT ANGELIKA DALLAS

The Grandmaster (PG-13)
Starring Tony Leung, Ziyi Zhang, Jin Zhang
Screenplay by Wong Kar-wai & Zou Jingzhi & Xu Haofeng
Directed by Wong Kar-wai
Like the divide between Wyatt Earp and Tombstone, this is the stuffier, star-studded tale of a legend. Ip Man and its sequel are the more entertaining versions of the story.
PLAYING AT ANGELIKA DALLAS 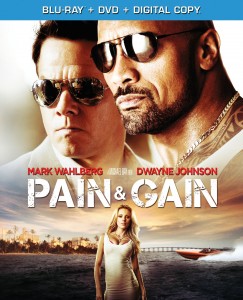 Pain and Gain (46%)
Critics were sharply divided on Michael Bay’s attempt to go slightly smaller. I think it’s like a Coen Brothers movie on literal steroids. Others were put off by how incredibly cynical it is. One thing we both agree on is just how great The Rock is. In the right role — almost always a supporting one — he’s terrific.

Blu-ray: And Then There Were None, Flat Top, The Idolmaker, The Many Adventures of Winnie the Pooh, Only the Valiant, Penny Serenade, Q: The Winged Serpent

Criterion: To Be or Not to Be