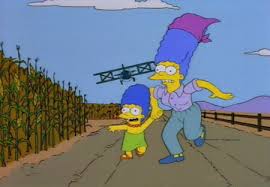 “Fear of Flying” (A-)
How great is it to get a Marge-centric episode that’s not about how unfulfilled she is (which is still always a great, sad story)? Here, her fear is rooted in discovering her dad was a flight attendant, and also at least three other plane-related traumas. But the latter doesn’t matter to her therapist (a terrific Anne Bancroft). “It’s all a rich tapestry.” Beyond the pain, there are tons of great gags, including Homer’s quest for a new bar (“Enjoy your death trap, ladies!”) and him pretending to be the window-washer to spy on Marge’s session, then plummeting to certain injury. 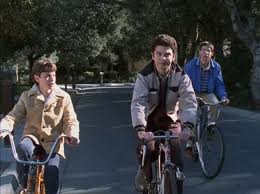 “The Garage Door” (A)
Devastating. Truly devastating. That’s what it would be like if my dad had an affair. And this episode captures that in bracing fashion. What I like best is how, despite Mr. Schweiber’s attempts to gloss over his infidelity to Sam, Sam absolutely knows what he saw, and his need to let Neal know. The No Secrets Rule goes beyond embarrassment. In the Freaks story, we also saw Ken get a kiss. It’s amazing how, aside from Kim, he’s the meanest of the regular characters on the show, yet we’re still rooting for him to get the gir. 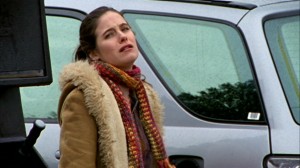 “Totem Mole” (B)
This is easily the weakest episode of the series, but I so enjoy spending time with Jaye and especially her brother that it didn’t really matter.

“Beginnings” (A-)
I’d been looking for another series to start this summer and continue into the fall. I’m so glad I picked this one. I’d been meaning to watch this for some time, and with The World’s End opening this week, the timing couldn’t have been better. This is a show that’s so far up my alley that it’s practically parked in my driveway. While the pilot isn’t as groundbreaking as the series would develop a reputation for, this is a British sitcom that’s witty but genuine. There’s no malice in this show whatsoever.

“Gatherings” (A-)
Another sitcom trope: the party episode. Again, there’s nothing groundbreaking here (aside from the camerawork), but this is quickly becoming the ultimate “hangout” show. You just want to spend time with these characters every chance you get.

This entry was posted in Reviews, Television and tagged freaks and geeks, netflix, simpsons, spaced, wonderfalls. Bookmark the permalink.