The Weekender: You’ve got to be Smurfing kidding me… again

2 Guns* (R)
Starring Denzel Washington, Mark Wahlberg, Paula Patton
Written for the screen by Blake Masters
Directed by Baltasar Kormákur
Based on a comic book I’ve never heard of, 2 Guns is exactly what an R-rated summer movie should be. There’s gunplay, witty banter and a dash of nudity. Wahlberg and Washington play off each other like Riggs and Murtaugh. In fact, it’s so enjoyable, I’d absolutely watch a sequel to this, as long as they don’t call it 2 Guns 2. Read my review at College Movie Review.

The Act of Killing (NR)
Directed by Joshua Oppenheimer
The Act of Killing is sure to be one of the most fascinating and disturbing documentaries of recent years. It’s a chronicle of the Indonesian Death Squads, who the director got to re-enact their war crimes for the camera. By the way, none of these murderous brutes (under orders or not), were ever tried for their genocide.
PLAYING AT BOTH ANGELIKAS

Terms and Conditions May Apply* (NR)
Directed by Cullen Hoback
Less visually interesting, but still disturbing is this doc (which I have seen) about the ultra-fine print in user-agreement from supposedly fellow freedom-loving corporations like Apple, Google and Facebook, who use all your private information and sell them to companies and turn them over to the U.S. government. It only gets more frightening from there, as the government then uses that info to stop “pre-crimes.” Read my review at College Movie Review.
PLAYING EXCLUSIVELY AT THE TEXAS THEATRE 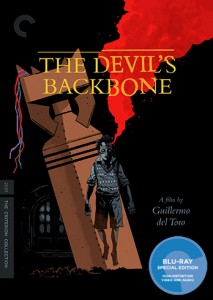 The Devil’s Backbone (The Criterion Collection)
Guillermo del Toro’s breakthrough film is another essential Criterion disc. Set in a Spanish orphanage just after World War II, The Devil’s Backbone is an atmospheric ghost story that haunts long after the credits roll. If you pick it up at Barnes & Noble before Sunday, it’s half-price.