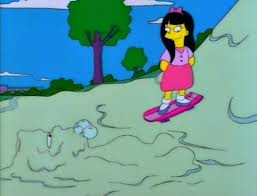 “Bart’s Girlfriend” (B+)
I think what I love most about Season Six, despite being more joke-focused, is that so far every canonical episode has only told one story, and done it very well. Jessica may just be the latest of Bart’s bad romances, but her episode is definitely the best. I also love this season’s commitment to out-there visual gags, like Bart’s skateboarding fiasco, which features not one, not two, but three overturned trucks spilling out their contents in his path. 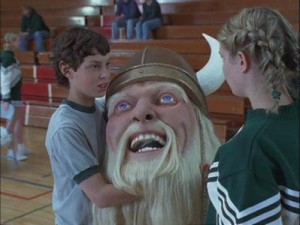 “We’ve Got Spirit” (B+)
Definitely the slightest episode of the series so far, but that’s like saying this Reese’s Peanut Butter Cup wasn’t quite as good as the last one. It’s still amazing. My favorite aspects for once didn’t involve Sam or Lindsay. They were, in order: Mr. Weir saying, “The pillars of the community, also known as my friends.” The freaks getting school spirit after taking a beating at the hands of those Lincoln High jerks. And Shia LaBeouf giving his best performance ever. “Draft Day” (B)
I’m grading this two-parter as one episode because it really is. It’s not a very funny episode, mainly because it’s all about hurt people lashing out at those they care about the most. I’m a little disappointed at the resolution to Jeremy’s dating story, mainly because it now feels even less consequential, and almost wastes the lovely Paula Marshall. 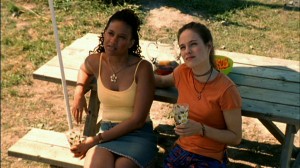 “Lovesick Ass” (B+)
I really love precocious kids, romantic rivalries and the episodes where Will They or Won’t They? couples answer the question. The aftermath’s not always pretty, but this episode combines all three and pulls it off beautifully.