“Lisa on Ice” (A-)
For my money, The Simpsons remains the only show that had the exact ratio down for satirical and sweet. I love Lisa & Bart Competition episodes, even if, like all overused Simpsons stories, feels rote. This episode skewered pee-wee sports leagues and the obnoxious parents who are obsessed with them, but ended on a sweet note that would feel jarring and sickening if this were any show but The Simpsons.

“April is the Cruelest Month” (A)
After the ugliness of last week’s Draft Day, the Sports Night team makes up touchingly during an office seder. Few shows ever display religious practices in a sincere way, and every conversation felt completely sincere. That’s more than enough to call this the very best episode of a difficult season. 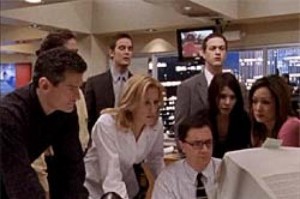 “Bells and a Siren” (A-)
The writing’s on the wall that everyone’s going to leave, one way or another. It’s another sad episode, but so emotionally engaging, that it doesn’t matter. 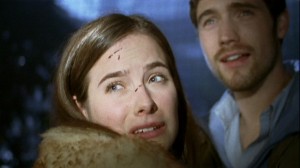 “Safety Canary” (B+)
One of the great tragedies of Wonderfalls getting canceled after four episodes is that no one got to see the show at its best. I’m never going to think of this as an all-time great show, but as breezy, cult gem, it’s indispensible. This episode, which shines a spotlight on how terrible a person Jaye is, completely subverts what we expect out of our sitcoms, but that’s why this show’s fanbase endured. Excluding anything creator Bryan Fuller did, there’s never been anything like this on TV since.

I also binged all eight episodes of Breaking Bad‘s fifth season, which I wasn’t expecting to do. I’ll have a longer post on those episodes before the premiere on August 11.