The Weekender: ‘Stand’ in the place where you live

The Last Stand (R)
Starring Arnold Schwarzenegger, Forest Whitaker, Johnny Knoxville
Story by Andrew Knauer
Screenplay by Jeffrey Nachmanoff and Andrew Knauer
Directed by Kim Jee-Woon
Sometimes lowered expectations can work to the filmmaker’s advantage. This rollicking B-movie is getting great reviews for not taking itself too seriously. Schwarzenegger returns to his first lead role in a decade as a small-town sheriff fending off a fugitive cartel leader.

Broken City (R)
Starring Mark Wahlberg, Russell Crowe, Catherine Zeta-Jones
Written by Brian Tucker
Directed by Allen Hughes
Mysteriously, Hughes is directing without his brother Albert. Together they’ve made some terrific thrillers. Their last January release (The Book of Eli) was surprisingly great. With Allen going solo, I’m hoping this NYC cop story/revenge tale is on the highs of Pride and Glory and not the barrel-scraping lows of Brooklyn’s Finest.

Amour (PG-13)
Starring Emmanuelle Riva, Jean-Louis Trintignant, Isabelle Huppert
Written and directed by Michael Haneke
A surprise contender at this year’s Oscars, Haneke restrained love story is likely to bore you to tears and then make you actually cry at all the sadness. Nearly all of Haneke’s films deal with death and the path of suffering to get there. I prefer his more subversive films, but his approach at being genuine at least means he’s not simply going for shock value. Still, this is not a movie I care to see.
PLAYING EXCLUSIVELY AT THE MAGNOLIA 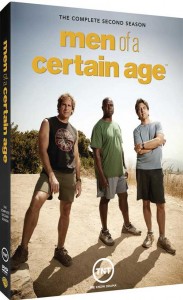 Men of a Certain Age (Season 2)
One of cable’s best shows was unfairly dropped by TNT after most 18-49 viewers passed it by, which is especially ridiculous given the show’s title. Ray Romano shows his actual acting chops alongside Scott Bakula. The always-great Andre Braugher rounds out the trio of buddies as they navigate their crises, trying to do the right thing, but can’t stop making the wrong decisions. It’s a perfect dramedy that I wish could have continued on indefinitely.

To buy:
Comedy: Joan Rivers: Don’t Start with Me

Blu-ray: Gentleman’s Agreement, Hannah and Her Sisters*, How Green was My Valley, Sleeper, Wake in Fright, Wild River, Wimbledon