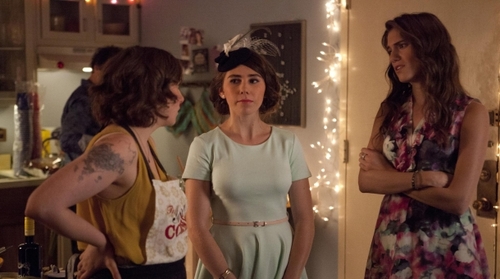 For the time being, I’m going to cover this show at length each week. I’ll post reviews as soon as possible, but that might not be until the end of the week. Comment away!

As I exited the first season of Girls, I was struck by just how much I was over the moon for it, despite my initial hesitation. For all its problems, I actually wanted more episodes of the first season.

But the second season premiere is by far the weakest episode of the series. In trying to catch up on everything that happened since the finale, a lot of things get missed, including a proper introduction to Hannah’s new boyfriend Sandy (Donald Glover).

The first half of the episode also features most of the characters behaving exceptionally horribly to one another. Even after a whole season of slow evolution, almost all behaved like complete buffoons. Worse yet, most of the episode was completely predictable. Are Shoshanna and Ray gonna have a dramatic reunion at the party? Oh yeah. And Shoshanna will get a great monologue, too, after she acts like a complete ditz at said party. Is Adam going to want Hannah back? Of course. It’s frustrating that a show that was so frequently unexpected went right where you thought it would.

Yet I still found plenty to love about this episode. For starters, I love how one joke reveals so much about a character. When her gay ex-boyfriend and current roommate Elijah (Andrew Rannels) suggests a “French salon” theme for their next party, Hannah perks up, saying, “I always thought I’d be good cutting hair.” For someone with so much education, she sure doesn’t know much.

What stuck with me the most about this episode was its overall theme: People deceiving themselves with what they think they want, and their friends enabling them to keep up the delusion. Marnie wants to get back with Charlie, maybe. Unless she’s just jealous that he’s with someone else, who’s so cartoonishly repugnant, Marnie (a royal bitch if there ever was one) looks positively radiant in comparison. Or I guess she’s just lonely. But why on earth would Charlie let her sleep next to him when she shows up drunk on his doorstep?

I suppose that she’s lonely because she started having a tryst with Elijah (who’s maybe not gay anymore?), but even that felt out of character for this show. It’s not so much the incident as much as the fact she rejected him until she felt his rock-hard pecs. This is HBO, not Cinemax, OK? And what led Elijah to kiss Marnie at all? He expresses sadness at becoming a gay stereotype (in this case the young guy having a sugar daddy) but trying to sleep with a woman for the first time in years feels like an extreme reaction.

Hannah is also deceiving herself. She thinks she can assuage her guilt about Adam’s accident by changing his bedpan and also spending the night (what is with characters staying beds of guys who are not their boyfriends?!), which makes everyone feel worse. Hannah, in a speech filled with B.S., explains that she’s tried to be altruistic—she hasn’t tried that hard—but she can’t help everyone, OK?!

Adam, always my favorite character despite his creepiness, is the only one who’s honest in this episode. His desperately funny line, “Want to watch Bagger Vance extras?” cuts to just how lonely he is and how much he misses Hannah, who finally got him to act like a real boyfriend, only for her to “butt-f***” him in the season finale. He deserves better, and so does the audience.