Note: This is the first weekend in years where no major studio had a single new wide release. Thus, I’ll only briefly summarize the handful of new films out this week.

IN THEATERS:
Angelika Dallas: Young Goethe in Love (NR)
Rapscallion law student falls for woman promised to another man. What my mom would call “a wig movie.” 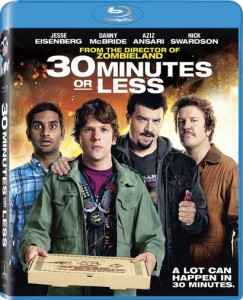 30 Minutes or Less (44%)
For some reason, critics didn’t respond favorably to Ruben Fleischer’s follow-up to Zombieland. While it’s nowhere near as brilliant and re-watchable as that dark comedy, 30 Minutes or Less is still hilarious and quotable, and deserves a rental.