“Homer the Great” (B+)
I had built up in my head that this was one of the Pantheon episodes. Aside from “We Do,” it’s definitely not, but there are so many terrific Homer-is-Stupid gags that it’s still side-splitting. 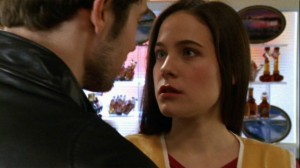 “Caged Bird” (B)
I’m still a little torn on this episode. I had given this show so much praise for refusing to fully commit to a happy ending for Jaye. So when Eric shows up in the epilogue, newly single and back in Buffalo, it feels like a cop-out. Still, even the most cold-hearted cynic would have to smile when they get their big kiss to the strains of Travis’ “Love Will Come Through.” Still, the hostage stuff, like the murderer episode a few weeks ago, added some real stakes to the show. I wasn’t always crazy about Wonderfalls, but it was a great place to visit this summer. 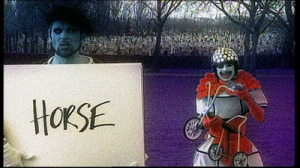 “Art” (A)
This show can be anything it wants, and today it’s a biting parody of both zombie films and the modern art world. David Walliams (later of the indispensible sketch comedy Little Britain) absolutely kills it as Brian’s pretentious, hurtful ex-partner Vulva. That’s what’s so great about this show: the little pangs of melancholy just below the surface of something howlingly funny. 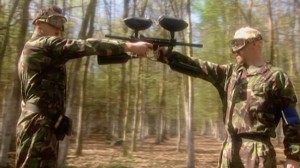 “Battles” (A-)
Paintball! Long before Six Feet Under or Community tried their hands at the hobby, Spaced was there to film it all like an epic showdown. The dog subplot isn’t quite as strong as Daisy’s job interview from “Art,” but the look of pure terror on her face when she realizes she’s bitching to the landlady about her actual break-up is priceless. Two other things that I just love: How average Simon Pegg and Jessica Hynes look. Unlike it’s time-slot partner Friends, no one on this show is so swoon-worthy. They’re a lot like you and me.

Note: While this is the end of our summer series, I’ll be back next week, kicking off roughly six weeks of coverage to close out Freaks and Geeks and Spaced. We’ll see where we go from there, but it will likely be in a different format from what I had been doing prior to this summer.

This entry was posted in Reviews, Television and tagged netflix, simpsons, spaced, wonderfalls. Bookmark the permalink.