The Weekender: I’ll be your ‘Mirror’

Wrath of the Titans (PG-13)
Starring Sam Worthington, Rosamund Pike, Edgar Ramirez
Screen story by Greg Berlanti & David Leslie Johnson & Dan Mazeau
Screenplay by Dan Mazeau & David Leslie Johnson
Directed by Jonathan Liebesman
On the Sequels No One Asked For front comes this follow-up to the dreadful CGI/fake 3-D update of the already ridiculous 1981 Clash of the Titans. This one features more yelling and enormous monsters, hopefully set to an anachronistic hard-rock soundtrack.

The Raid: Redemption (R)
Starring Iko Uwais, Ananda George, Ray Sahetapy
Written and directed by Gareth Evans
In what’s supposedly the most awesome movie of this or any year, this Indonesian import (Americanized with a score by Mike Shinoda of Linkin Park) follows a cop and SWAT team as they tear through 30 stories of a slum on their way to take down a ruthless crime lord. Expect a body count higher than every other 2012 movie combined.
PLAYING EXCLUSIVELY AT THE ANGELIKA DALLAS

Detachment (R)
Starring Adrien Brody, Marcia Gay Harden, Bryan Cranston
Written by Carl Lund
Directed by Tony Kaye
Not high school movies are created equal, but not all directors are Tony Kaye. The man behind visceral love-it-or-hate-it movies like American History X and Lake of Fire takes a step back, only serving as director for the script by first-timer Carl Lund. Brody stars as a substitute teacher completely adrift in his class and in his life. The cast (which also includes Christina Hendricks and Bill Petersen) is unimpeachable, and even the movie doesn’t stick the landing, this will be an interesting, well-acted drama about lost souls and deteriorating education system.
PLAYING EXCLUSIVELY AT THE ANGELIKA DALLAS 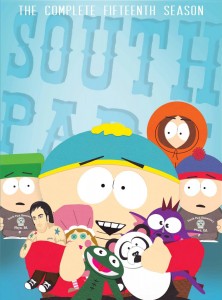 South Park (Season 15)
After accusation the show was losing its touch (this after it found its terrorist-baiting episode “201” heavily edited) and on the verge of cancellation (despite consistently high ratings), the show came roaring back with some of its best episodes en route to a renewal through 2016. Season highlights include “Human Centipad,” in which Apple kidnaps its customers for sadistic experiments, and “Broadway Bro Down,” which reveals the biggest names in theatre are only in it for the chicks.

Note: I’m not recommending this new Blu-ray edition of Casablanca only because it’s been on Blu-ray twice before. This new set is nothing more than a cash-grab.