The Weekender: ‘Be Afraid,’ be sort of afraid 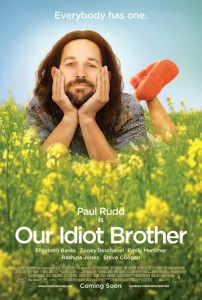 Our Idiot Brother
Starring Paul Rudd, Elizabeth Banks, Zooey Deschanel
Written by David Schisgall, Evgenia Peretz
Directed by Jesse Peretz
Now this is the kind of summer sleeper I can get behind. The immensely likable Paul Rudd stars as Ned, the title character fresh out of jail after selling pot to uniformed cop. Like Rudd, he’s almost relentlessly nice and upbeat—think a pot-smoking Ned Flanders—but constantly annoys his three sisters (Banks, Deschanel, Emily Mortimer) who view him more as nuisance than family. The rest of the cast is totally stacked: Kathryn Hahn (Step Brothers), Steve Coogan (Hamlet 2), Hugh Dancy (Adam), Rashida Jones and Adam Scott (from TV’s Parks and Recreation) and that might make this the summer’s best comedy. 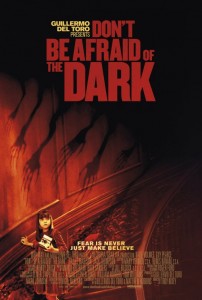 Don’t Be Afraid of the Dark
Starring Katie Holmes, Guy Pearce, Bailee Madison
Screenplay by Guillermo del Toro & Matthew Robbins
Directed by Troy Nixey
The latest haunted house movie—a remake of a 1972 made-for-TV frightener—pays tribute to the movies that inspired it (including Gremlins, Poltergeist and Guillermo del Toro’s own Pan’s Labyrinth), but doesn’t do much more. It still provides some scares but never defines itself. Read my full review at Pegasus News. 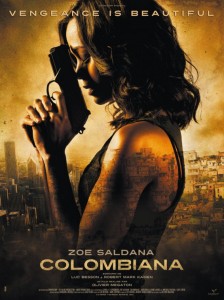 Colombiana
Starring Zoe Saldana, Michael Vartan, Callum Blue
Written by Luc Besson, Robert Mark Kamen
Directed by Olivier Megaton
That director’s name bothers me. It’s the stupidest pseudonym since KAOS, the man (entity?) who gave us the atrocious Ballistic: Ecks vs. Sever. I doubt with this cast the movie could be on that horrible level, but despite a script from Luc Besson (Léon, Taken), this looks like a brainless attempt to make a lady-centric Bourne franchise. Revenge may be a dish best served cold, but you’ve got to add a little spice to distinguish it from the thousands of others.