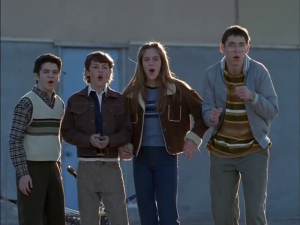 “Carded and Discarded” (A)
This was the only episode I remember watching when the show was originally on. There’s no way I could have imagined just how much it would mean to me later in life. Freaks and Geeks couldn’t be more low-stakes (Fake IDs! New fun girl!) yet that allows the show to be perhaps the most resonant series ever made. This episode is a bonanza of guest stars that alone proves Allison Jones is to casting what Edith Head is to costumes and Rick Baker is to make-up. But also, how great is Dave “Gruber” Allen as Mr. Rosso? He absolutely kills it. “Dana Get Your Gun” (B+)
It’s a little jarring how the show has changed from the adventurous heights of the first season. It’s not bad by any means, but it’s certainly different. It may have led to an uptick in the ratings, but the show was canceled anyway. I’m not sure I’m big on the pairing of Sam and Dana, but as with Jeremy and Natalie’s uncomfortably realistic break-up, the writing’s been on the wall for a while now. “And the Crowd Goes Wild” (B+)
Temporary blindness is very hard to pull off. Only Arrested Development has made great comedy out of it recently. Even so, this is archetypal Sports Night. It’s not the show at its very best, but it has all the elements that made this show so winning. 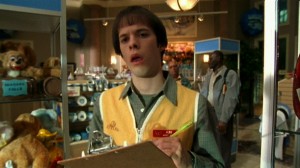 “Muffin Buffalo” (B)
Pretty slight after the high points of the last two episodes. It may even be the slightest episode so far. But Eddie Kaye Thomas and the great Beth Grant absolutely kill it as two of the trailer park’s more eccentric residents. I also like that the show is molding Jaye into a more complex character. Despite her extreme narcissism, she’s come to brush off the praise she receives from the people in her life, because she’s only bridging coincidences, not truly being sacrificial. And I’m definitely digging the possibility of Aaron joining in on the quests. Lee Pace plays lackadaisical better than anyone.

This entry was posted in Reviews, Television and tagged amazon, freaks and geeks, netflix, sports night, wonderfalls. Bookmark the permalink.