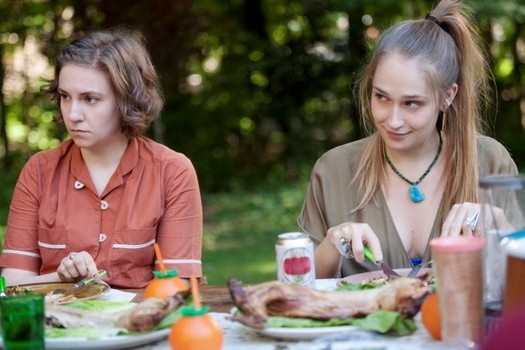 While having dinner this week, a friend made a great observation about Girls I hadn’t thought of: the title is perfect because all the females on the show act like teenage girls (this extends to the men acting like boys as well).

So I was glad this episode focused mostly on a character with the least direction. Jessa has pretty much been my least favorite character throughout the entire run of the show and that’s mostly due to how indecipherable she is. Whether that’s a poorly written character or one who’s a mystery even to herself remains to be seen. Regardless, the best parts of this episode involved her and her search for meaning in the wake of her divorce.

Unfortunately, this is Hannah’s show and it’s either narcissism or fear or something else that keeps this episode from being great. Any scene with Jessa and her dad (guest star Ben Mendelsohn) is among the best the show has ever done. Alas, it’s spliced up with Hannah doing the following things: screaming loudly on the toilet, peeing at an outdoor train station, having sex with a creepy guy in a turtleneck and jorts in a graveyard. I couldn’t have cared less about any of that if I tried.

Jessa doesn’t have much luck with her dad, a man who’s response to any difficult situation has been to flee it as quickly as possible. There was huge potential for this to be a raw episode on par with “It’s a Shame About Ray,” and it has one of those moments when Hannah calls her parents to tell her she loves them, only to get accused of using kindness as a ploy to get something. Then again, when you’ve never really shown genuine, honest emotion, it’s hard to know when you’re being real.

But the power that was lurking beneath the surface of this episode was hampered by literal toilet humor. And something that’s really starting to bug me about this season: Hannah suddenly being irresistible. Yes, I can buy her sex-filled weekend with that doctor, but I’m having trouble buying that literally every guy she meets wants to bed her. This truly must be a fantasy world.

Bitch of the week: Hannah’s mom, but I can’t say that I blame her, because Hannah’s never really talked to her parents unless she’s needed something.

Best fashion choice: Turtleneck-jorts combo, which, like the three-wolf-moon shirt, gives you virility.

“What’s a girl like you doing in a place like this?” (for a character who barely makes an appearance): Shosh and Marnie, both of whom would probably better friends than Hannah, but Jessa would never ask them to come along