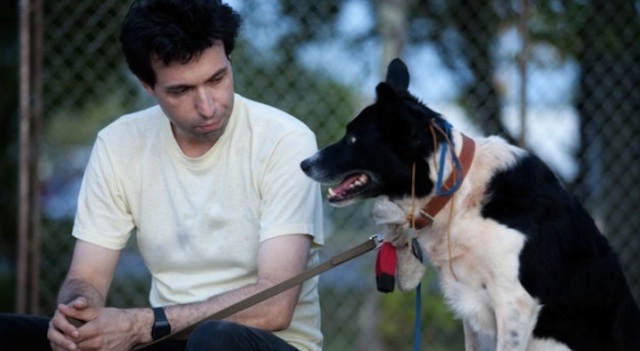 “It’s hard to tell someone so young that things don’t always turn out the way you thought they’d be.” – Ray

Girls has always been a show about facades and this week’s episodes brought them all crashing down.

After last week’s Hannah-fest, the show kept her story in the background, giving us time to experience the heartache of Marnie and, especially, Ray. He’s become my favorite character this season and seeing everything running through his mind in those silences just reinforces that opinion. Alex Karpovsky needs an Emmy nomination, dammit.

This week, he voyages into Adam’s lair to retrieve an annotated copy of Little Women his godmother gave him. Adam, always one to ask for help from the nearest person, enlists Ray to join him in a trip to Staten Island (which he thinks is an amusement park because you have to take a ferry to get there) to return a dog he stole from some douchebag. Ray only accepts because Adam looks pathetic and because it would provide, in theory, a chance for him to be manly.

During their increasingly tense conversation, Ray and Adam both realize the latter is still in love with Hannah. The moment comes at one we’ve all experienced: the ex can put down the ex, but no one else can. Adam eventually abandons Ray and the pooch, because that’s what he always does when he’s forced to confront something: he leaves.

After a frightening encounter with the dog’s unpleasant owner, Ray weeps as he watches the sunset over Manhattan. He’s a man out of time: He’s too old for his current situation, yet he hasn’t outgrown it. No, he shouldn’t take a course led by Donald Trump, but maybe he should have more aspirations than assistant manager at a coffee shop. That final shot proves once and for all that Girls is a drama and not a comedy.

But I don’t even know if that’s the saddest moment in this episode.

I think that has to go to the shot of Marnie and Hannah on the phone, both too stifled with pride to say to each other what needs to be said: “I need you.” Hannah is crushed under her deadline and Marnie is devastated that Booth, who has repeatedly used for her sex, only wants to use her for sex. It’s both easy and difficult to feel sorry for Marnie this season. Easy because she’s had a lot of crap to deal with, but difficult because it’s so bewildering that she could be so naïve to think hostess meant girlfriend.

This was the first episode Lena Dunham neither wrote nor directed and I think the more she lets go of the reins, the more opportunity this show has to grow. Maybe the characters will, too.

Bitch of the week: Booth’s ice cream-stealing girlfriend, who, like many people on this show, doesn’t know how to apologize for anything.

Best fashion choice: Marnie’s plastic dress, which is absolutely the kind of thing you would have to wear to impress at what was surely the worst artsy-fartsy party New York had ever seen.

“What’s a girl like you doing in a place like this?” (for a character who barely makes an appearance): Jessa aka Debbie Downer, who pops in only to offer some depressing observations about the meaninglessness of life