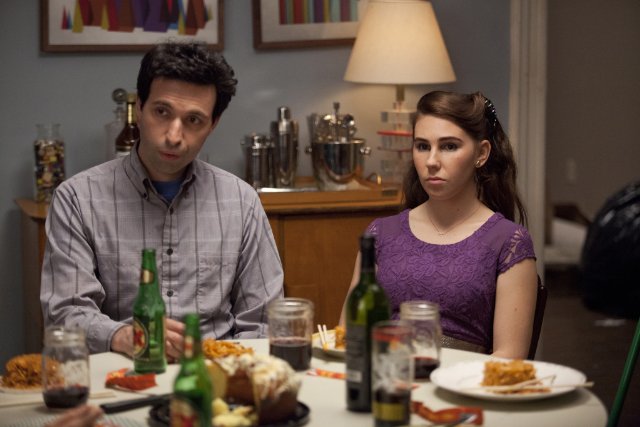 Well, that episode hit me like a punch in the gut.

The characters on Girls tend to lash out at the people they care about the most, saving the most brutal remarks for those closest to them. Every single person on this show found themselves both dishing out and taking a battery of verbal abuse. For many, it ended up being a breakthrough, shaking off the disillusion that shapes their view of their relationships. Many ended (though with this show it can safely be said that nothing ends), potentially giving them all fresh starts.

What’s hardest to decipher about Girls is if we’re really supposed to believe that Hannah is the only one making a concerted effort to better herself, or if we’re supposed to find her the most misguided of all. This episode leaves us no closer to finding the answer. Yes, she defends Marnie after Charlie calls her the C-word, but she also ludicrously believes making an entire meal start to finish—and not a good one at that—is bringing her closer to maturity.

“It’s a Shame About Ray” is ostensibly about two tables filled with people barely masking their disgust. I’d call it “My Dinner with Assholes.” But what made this episode stand out from the rest of the season is how almost nothing is said out of selfishness. Everything is fueled by anger, because none of these characters ever say what they mean to say, so when they finally do, all that’s left is hurt.

The main dinner takes place at Hannah’s apartment. She’s hosting the get-together to celebrate the publishing of her cocaine piece, but really it’s just a chance to show what she feels is her moral superiority (despite just publishing a piece about a cocaine binge). She invites Charlie and his girlfriend Audrey as well as Marnie, expecting Marnie to be a no-show while still showing that she’s still “the good friend.” Marnie, of course, does show up, leading to legitimate awkwardness.

Let’s get one thing clear: Audrey is pretty insufferable, and that’s saying something. She’s starting her own line of mustards! She asks Marnie if her hosting duties include an open mic or “poetry thing.” And she accuses Marnie of stalking Charlie, even though that’s hardly true, but she’s right to be angry about her staying over at Charlie’s. She’s also right to be pissed when Charlie runs after Marnie instead of staying beside her. But if there’s a catalyst for everyone’s bitchiness that night, it’s her and those stupid feathers in her hair.

The other dinner party is no less awkward as Jessa meets Thomas John’s parents for the first time. The dad (played brilliantly by Griffin Dunne) is enthralled by Jessa, surely the most interesting girl his son’s ever dated. The mom is less amused, considering she doesn’t have a job, is much younger than Thomas John and possibly a gold digger. That seems absurd given what we’ve seen of them, but it plants a seed that puts down bitter roots once the previously happy couple gets home.

The fight between Jessa and Thomas John is perhaps the most uncomfortable scene the show’s ever done. It’s bracing, excruciating and brilliantly acted and directed. Their dialogue is so harsh and ugly that at times I felt I was watching a 21st Century Who’s Afraid of Virginia Woolf? Jessa lays into Thomas John for being “boring,” while he retorts that she will never experience genuine emotion because all she wants are experiences. She’s settling for chapters in a book instead of a real life.

We end with two scenes: one touching, one gross. The first happens on the subway platform with a newly homeless Ray telling Shoshanna that he loves her. It’s sweet and simple and heartbreaking (in the best way). The latter happens with a tearful Jessa crawling into the tub with Hannah, whose No. 1 concern is not getting any of Jessa’s “snot-rocket” on her. Maybe Judd Apatow has rubbed off on Lena Dunham more than I thought.

Bitch of the week: Jessa, who was so horrendous to Thomas John without illuminating anything about his character.

“What’s a girl like you doing in a place like this?” (for a character who barely makes an appearance): Booth Jonathan, who Marnie claims she’s “sorta seeing.” How fitting that he’s not around.