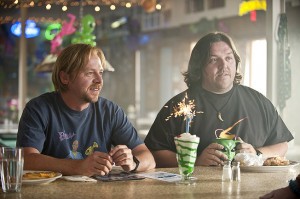 Much has already been made about how Paul lacks the aspirations of Pegg and Frost’s last two outings (Shaun of the Dead and Hot Fuzz). It also has none of the poignancy of director Greg Mottola’s last effort, Adventureland. But Paul does have a serious commitment to silliness and wicked anti-authority streak.

The movie is essentially every geek’s dream: meeting an alien who just wants to hang out with you. That alien is Paul (voiced by Seth Rogen in what’s probably his best role to date–I don’t know if that’s a testament to the wittiness of the script or a slight to Rogen’s abilities as an actor), who looks just like every alien you’ve ever seen. That’s because he was the first creature to land here and the government and Hollywood have been making money off his image ever since.

Now, just like E.T. (whom he inspired Steven Spielberg to create), he wants to head home and the RV-driving British misfits (Pegg and Frost) are his ticket there.

Along the way, the trio meet a cycloptic Bible thumper (Wiig, in prime comic form) who has her eye opened–literally at one point–thanks to Paul’s endless knowledge of the universe and his creatively foul mouth. But chasing them are Wiig’s father (John Carroll Lynch) and two rednecks (David Koechner and Jesse Plemons) who got their truck dented by our heroes’ RV. All three are unfortunately wasted here, but with a talented cast this size, not everyone can get enough moments to shine.

And that’s just for starters. See, the CIA isn’t too happy about Paul’s little jailbreak and the boss lady (Sigourney Weaver, who’s voice is so recognizable, I’m surprised the filmmakers kept her hidden until the film’s climax) wants him back, mostly dead. So she dispatches Agent Zoil (Jason Bateman) to eliminate him. He gets no help from his goofy fellow agents (Joe Lo Truglio and Bill Hader, who almost walk away with the whole movie) who don’t like being sent on a mission with all details on a “need-to-know basis.”

It’s all pretty standard stuff and the film doesn’t really say anything new. Pop culture references abound, but they’re never used to prop up the film. This is the movie Fanboys wanted to be, but didn’t have the cast or jokes to pull off.

That means that Paul won’t be as revered as Edgar Wright or Greg Mottola’s other works, but it’ll still be perfect for those who want to laugh as much as possible.