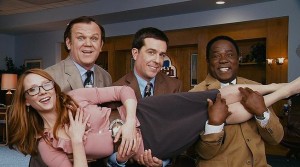 Looking for laughs? The pitch-perfect cast of Cedar Rapids has got you covered. (Fox Searchlight)

Sometimes the B-team can show up their varsity counterparts. No one in Cedar Rapids really gets a chance to take the lead in Hollywood, which is a shame because all of the cast excel in their roles. We’ve seen these characters before, yet no one feels like a type.

Our quasi-hero is Tim Lippe, a man who takes pride in his job as one of the top insurance salesmen in the small (we’re talking really small) town of Brown Valley, Wisc. When Roger, the company’s rep at the annual convention, dies in a tragically kinky accident, Tim gets a chance to leave his hometown for the bustling metropolis of Cedar Rapids, Ia.

His roommate at the conference is Ronald (Isiah Whitlock, Jr.) is the first black man he’s ever seen in person and he’s even more of a square than he. But what Helms displays here is different than his characters on The Office (obnoxious) or in The Hangover (spineless). He’s a dweeb, but not a do-gooder. He does things he wouldn’t normally, but this is not a typical “inexperienced-goober-gets-seduced-by-temptations-of-the-big-city” tale.

There’s a lot more going on than just wacky shenanigans, though there are plenty of those, many courtesy John C. Reilly, who dons a dead-on Minnesota accent. He’s a vet of these conferences, constantly sticking it to the man–in this case, Kurtwood Smith (That ’70s Show) as the organization’s hyper-religious leader. He’s the one encouraging his new friends to engage in the kind of drunken hijinks he uses to cope with his crumbling home life.

Cedar Rapids, more so than any other movie–and yes, there aren’t many movies set at these things–captures the feeling of conventions: the monotony of the scheduled bits, the friendships that grow out of mutual boredom, the tendency to do things your better judgment would rule against were you anywhere else. It’s got a terrific sense of place, even if that place doesn’t offer much excitement.

Now unlike most Hollywood comedies–or like most independent comedies–each character has an undercurrent of poignancy, a twinge of sadness. Yet it keeps those tendencies under the surface where they belong. It doesn’t ever break into full-blown melodrama, but balances its tones delicately. That’s one of director Miguel Arteta’s strong suits.

When the gang (including a surprisingly funny and sexy Anne Heche) isn’t getting into trouble, the movie lags some–that corruption subplot in particular doesn’t quite work for me, and it’s a little troubling that the movie’s three female characters are either bed-hoppers or an actual whore–but it’s still sharper than any other comedy you’ll find out in theaters now.