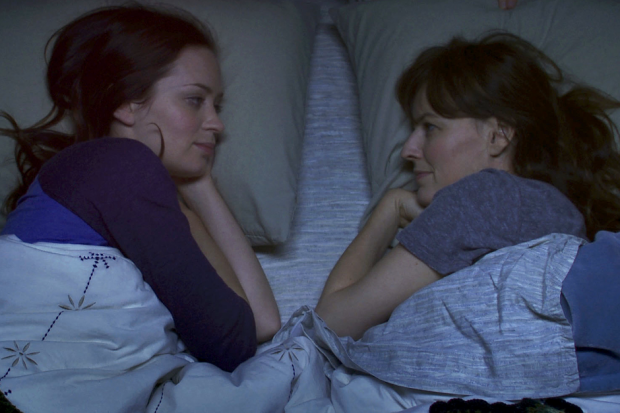 Movies can be malleable, but you can only take stretch thin material so far.

Your Sister’s Sister, the latest from Lynn Shelton, has about 70 minutes of material stretched out to ninety. She fills in the rest with gorgeous scenery from her native Seattle. There are certainly worse ways to spend an hour-and-a-half.

The movie is rather inconsequential, especially because we know, since Shelton is such a warm writer-director (that’s not a knock), that everything will be resolved by the end of the film. There will be some conflict, but it ultimately won’t matter because everyone will find themselves in a big group hug.

Again, there’s nothing wrong with this—especially considering how cynical many indies are. And there’s nothing particularly wrong with Your Sister’s Sister, either. It just doesn’t rise to the occasion, that occasion being the winning performances from the trio of the cast.

Duplass is on something of a roll here after last week’s killer Safety Not Guaranteed. He’s a bit less confident here as Jack, sulking through life after his brother’s death, until he makes a scene at a memorial for his bro. After witnessing this drunken speech, his friend Iris (Blunt) all but forces him to take a week at her father’s idyllic cabin on a remote island where he can get away from his daily pressures and properly process his grief.

When he arrives, he stumbles in on Hannah, her half-sister (DeWitt). Neither knew the other would be there, and they bond over a bottle of tequila and broken hearts. As these things tend proceed, Hannah and Jack wind up in bed together, and try to hide their dalliance from the sister, who unexpectedly shows up the next morning.

They keep it quiet for a while, and there’s some good comedy and drama here, particularly whenever Hannah and DeWitt reminisce about spending time with their dad at the cabin and genuinely acting like sisters.

But then the inevitable confessions start rolling out: Jack slept with Hannah, Iris is in love with Jack, Hannah might have been planning the encounter, and on and on. Feelings get hurt, everyone breaks down in tears. So then there’s an extended interlude as everyone spends time apart before returning to the cabin to apologize and pledge devotion to one another.

A lot of movies that rely on improvisation for a lot of the dialogue wind up feeling like sketches and that holds the movie back, I think. No one here is too drawn-out, so it’s a little hard to get involved, especially when we’re all but guaranteed a happy ending for everyone.