The Weekender: ‘Hunter’ always gets captured by the game

Abraham Lincoln: Vampire Hunter (R)
Starring Benjamin Walker, Rufus Sewell, Dominic Cooper
Written for the screen by Seth Grahame-Smith
Directed by Timur Bekmambetov
Grahame-Smith’s follow-up to Pride & Prejudice & Zombies (the movie version of which has been delayed indefinitely) gets adapted by Bekmambetov’s visual overload. The idea is ridiculous, so why does this movie look so serious? This should be an enormous amount of fun. Instead, it looks like a bloody mess.

Brave (PG)
Starring the voices of Kelly Macdonald, Billy Connolly, Emma Thompson
Screen story by Brenda Chapman
Written by Mark Andrews and Steve Purcell and Brenda Chapman and Irene Mecchi
Directed by Mark Andrews, Brenda Chapman, Steve Purcell
Though not as emotionally dense as Pixar’s Top 3 (WALL-E, Up and Toy Story 3), Brave is a grand adventure featuring the most beautiful animation the studio has ever produced. The short before it, “La Luna,” is perhaps the most beautiful thing I’ve ever seen on screen. Read my review for College Movie Review here, and a feature on why Merida is the first real Disney princess here.

Seeking a Friend for the End of the World (R)
Starring Steve Carell, Keira Knightley, Melanie Lynskey
Written and directed by Lorene Scafaria
I sincerely hope this movie is as good as the previews promise. You’ve got two winning leads and a slew of cameos from great comedians and actors. This a road movie set against the ever-popular backdrop of the coming apocalypse. A dark, romantic(?) comedy in the summer months? I’m there.

Your Sister’s Sister* (R)
Starring Mark Duplass, Emily Blunt, Rosemarie DeWitt
Written and directed by Lynn Shelton
A thinly sketched but well-acted comedy could have used a little less improv. It’s got an abundance of heart, though. Read my review on this blog Friday morning.
PLAYING AT THE ANGELIKA PLANO

The Woman in the Fifth (R)
Starring Ethan Hawke, Kristin Scott Thomas, Joanna Kulig
Written for the screen and directed by Pawel Pawlikowski
I didn’t know someone had made a hybrid of Elegy and Hawke’s own Taking Lives, but, uh, here you go.
PLAYING EXCLUSIVELY AT THE ANGELIKA DALLAS 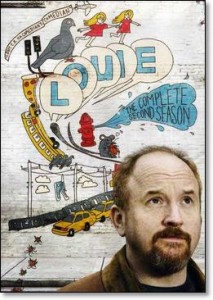 Louie (Season 2)
I can’t think of a show that improved so much between its first and second seasons. The first season was funny and misanthropic, but season two went so far past the boundaries of sitcoms that it defies categorization. Does this art imitate his life, or is it vice versa, or is it all mixed in together? Whether he was tackling his bungled attempts at fatherhood, his dangerous trip to Afghanistan or his unrequited love for Pamela (Pamela Adlon), Louis C.K. did it from a new angle and made it seem so easy.

Criterion: And Everything is Going Fine, Gray’s Anatomy

Blu-ray: All Screwed Up, Evita*, Love & Anarchy, Newsies*, The Seduction of Mimi, Sister Act,* Sister Act 2: Back in the Habit