What to Expect When You’re Expecting (PG-13)
Starring Jennifer Lopez, Chris Rock, Dennis Quaid
Written for the screen by Shauna Cross and Heather Hach
Directed by Kirk Jones
The movie I was least excited about this summer doesn’t look any better in the weeks since I wrote my preview. Here, we get a bunch of half-baked vignettes about pregnancy sometimes not being very much fun. Did you also know women claim to want a natural birth, and then when they get to the hospital room, they’re screaming and sweating and demand the epidural. I’ve never seen anything like that happen in a comedy before, have you?

AT HOME (click the link to watch on Netflix):
Top Pick: 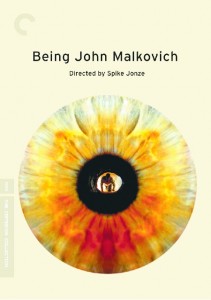 Being John Malkovich (The Criterion Collection)
At the time, this was far and away the most bizarre, original and wholly captivating film ever released. The fact that it not only doesn’t fall off the rails but also succeeds as a truly unforgettable experience is a testament to the devotion of its cast and crew. Malkovich launched the careers of Spike Jonze and Charlie Kaufman, two outsiders who never compromised in the years that followed. As with any Criterion release, the movie will look and sound perfect.

Note: Gone Fishin’ and Holy Man, two of the worst movies ever made, are now on Blu-ray for some reason. I guess everything needs to be on Blu-ray.