The Weekender: ‘War,’ what is it good for?

This Means War (PG-13)
Starring Reese Witherspoon, Chris Pine, Tom Hardy
Story by Timothy Dowling and Marcus Gautesen
Screenplay by Timothy Dowling and Simon Kinberg
Directed by McG
Action comedies can be tricky business. They usually provide one part but lack the other, or go full throttle with both until you end up with an obnoxious, smug little movie. I have faith in Chris Pine and Tom Hardy, who can pull off both. And somehow Reese Witherspoon keeps looking better year after year. But their maestro is McG, who’s had success on television but his movies are either a flurry of bad decisions (the Charlie’s Angels films) or flurry of emotionless setpieces (Terminator: Salvation). We’ll call it a wash.

Ghost Rider: Spirit of Vengeance (PG-13)
Starring Nicolas Cage, Idris Elba, Ciaran Hinds
Story by David S. Goyer
Screenplay by Scott M. Gimple & Seth Hoffman and David S. Goyer
Directed by Neveldine/Taylor
So, who thought this was a good idea exactly? I know Nicolas Cage will agree to anything, but who gave the green light to a sequel to arguably the worst comic book movie ever made? We may never know, but you can bank on this installment being even more unbelievably stupid.

The Secret World of Arrietty (G)
Starring the voices of Will Arnett, Amy Poehler, Carol Burnett
English-language screenplay by Karey Kirkpatrick
English-language version directed by Gary Rydstrom
Studio Ghibli (who distributed a lot of master Hayao Miyazaki’s classics) presents this anime version of beloved children’s book The Borrowers, about miniature people inhabiting our giant world. I’m sure it’s a delightful little film, but it all feels quite inconsequential.

Deep in the Heart (PG-13)
Starring Jon Gries, Elaine Hendrix, Val Kilmer
Written by Brian A. Hoffman, Josh Fasulo
Directed by Christopher Cain
From the director of Pure Country comes another sappy story about redemption with lots of bad acting and unearned sentimentality. Could eventually be worth the rental if you’re a big fan of the Nicolas Cage impression Val Kilmer’s been doing for a while. Here he plays a spiritual guide (who may or may not be real) known simply as the Bearded Man. But how can anyone be expected to take a movie seriously when your emotional center is Uncle Rico from Napoleon Dynamite?

Thin Ice (R)
Starring Greg Kinnear, Alan Arkin, Lea Thompson
Written by Jill & Karen Sprecher
Directed by Jill Sprecher
The small-town schmuck tries to pull off a crime is well-worn indie trope, as many have failed where the Coen Brothers so often succeed. But this one’s got a likable cast and frigid setting, so it’s quite possible we’ve got a winner here.
PLAYING EXCLUSIVELY AT THE MAGNOLIA (also available on demand) 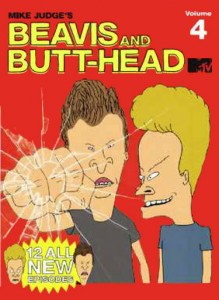 Beavis and Butt-head (Vol. 4)
Rarely have I been this excited for a show’s return. The duo now riffs on more than just music videos. They hate on Jersey Shore’s guidos and YouTube’s quasi-famous stars. Plus, no show packs more jokes per minute. The streak started to waver toward the end of the season’s run, but there’s still plenty of hilarious moments. Personal favorite: Season premiere “Werewolves of Highland,” in which the boys take Twilight-mania too seriously and try to turn into werewolves to score chicks, but end up in the hospital with a laundry list of diseases.

Blu-ray: All Quiet on the Western Front