Edge of Tomorrow
Tom Cruise again tries to show off that he’s immortal, as the 50-year-old again plays an action hero in this sci-fi Groundhog Day. Though early reviews are ecstatic, this movie has a lot to prove for me. Emily Blunt better be as a big a deal as the posters make her out to be, and not relegated to love interest status. She’s too good for that.

WIDE RELEASE
The Fault in Our Stars
Though Shailene Woodley and Ansel Elgort give it their all, there’s something phony about this romance between cancer patients. I’ll have a full review up later in the week. 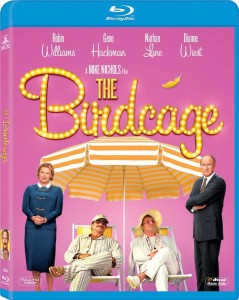 The Birdcage
Though occasionally it’s a little too noisy for it’s own good – though what do you expect when your leads are Robin Williams and Nathan Lane – it’s a thoroughly entertaining romp, even if it’s not as clever as the French original. Hank Azaria, as I’m sure you know by now, steals the show.

New to Blu-ray
• The Break-Up*
• Bridget Jones: The Edge of Reason*
• Death Bed: The Bed That Eats*
• King and Country
• Kissing Jessica Stein*
• The Nutty Professor (1963)
• The Outsiders*
• Ravenous
• The Ringer
• Sugar Cookies
• You, Me and Dupree

This entry was posted in Film, Previews and tagged edge of tomorrow, fault in our stars, night moves, ping pong summer, words and pictures. Bookmark the permalink.