ParaNorman (PG)
Starring the voices of Kodi Smit-McPhee, Anna Kendrick, Christopher Mintz-Plasse
Written by Chris Butler
Directed by Chris Butler and Sam Fell
You know, it’s nice to see a movie with the “para-” modifier not followed by the word Activity. Butler jumps from storyboard to full-time writing and directing with this dark comedy about a boy who has to protect his town from an undead invasion. I’m always on board for a kids’ movie with an edge, especially when you’ve got the team from Coraline working on the animation.

Sparkle (PG-13)
Starring Jordin Sparks, Whitney Houston, Cee-Lo Green
Screenplay by Mara Brock Akil
Directed by Salim Akil
More sad news from Hollywood: One of the few times we’ll get to see a predominantly black cast outside of a Tyler Perry movie is a remake of a melodramatic Motown rip-off, retelling a story Dreamgirls already did pretty well. And have you heard? This was Whitney Houston’s last acting role before she died. Aren’t you excited? Because she was such a great actress and all! And promoting a movie in this manner is in no way ghoulish, right?

The Odd Life of Timothy Green (PG)
Starring Jennifer Garner, Joel Edgerton, C.J. Adams
Screen story by Ahmet Zappa
Written and directed by Peter Hedges
This would have made a great horror flick—boy magically grows out of the garden—but sadly is the year’s most aggressively mediocre movie. Adams is the titular vegetable boy who is literally a perfect kid (though a bit of a brown-noser) to his barren parents. The cast (including Dianne Wiest, David Morse and uh, Common) is game, but unfortunately, the script never asks them to rise above their stereotyped roles.

Searching for Sugar Man (PG-13)
Directed by Malik Bendjelloul
One of the year’s most acclaimed documentaries (which means it won’t be nominated for an Oscar) follows the South African director as he searches for the reclusive guitarist who inspired him during Apartheid.
PLAYING AT THE ANGELIKA PLANO and THE MAGNOLIA

The Imposter (R)
Directed by Bart Layton
Here’s one of I’ve been excited about for a while. The gist (and a true story): A Texas boy goes missing. Three years later, a Frenchman claiming to be that missing boy shows up at the grieving family’s steps. How were they possibly fooled? That’s what director Bart Layton (who’s earning comparisons to the great Errol Morris) seeks to find out.
PLAYING AT THE ANGELIKA DALLAS and CINEMARK WEST PLANO

Celeste and Jesse Forever (R)
Starring Rashida Jones, Andy Samberg, Elijah Wood
Written by Rashida Jones & Will McCormack
Directed by Lee Toland Krieger
Jones, ever the eternal optimist, plays half of the divorcing couple of the title. She tries to keep the friendship with Jesse (Samberg) up even as their romance fades. Disastrous but hilarious results ensue.
PLAYING AT THE ANGELIKA DALLAS and CINEMARK WEST PLANO

The Awakening (R)
Starring Rebecca Hall, Dominic West, Imelda Staunton
Written by Stephen Volk and Nick Murphy
Directed by Nick Murphy
After The Woman in Black, I doubt we need another early 1900s British haunted-house movie, but I’m happy any time Rebecca Hall (The Prestige, The Town) gets work.
IN LIMITED RELEASE 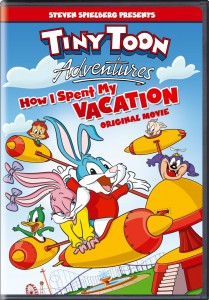 Tiny Toon Adventures: How I Spent My Vacation
My VHS copy of this has long since worn out, so I’m genuinely thrilled it’s found its way to DVD. Sure, some of the references are a little dated, but this feature-length special is one of the most clever, hilarious and (occasionally) disturbing pieces of animation to be released in the ’90s. It’s probably even better than you remember.

To buy (click the link to watch on Netflix):
Comedy: Jay and Silent Bob Get Old: Tea Bagging in the U.K.