The Weekender: Some assembly required

The Avengers (PG-13)
Starring Robert Downey Jr, Chris Hemsworth, Chris Evans
Screen story by Zak Penn and Joss Whedon
Screenplay by Joss Whedon
Directed by Joss Whedon
And so another summer blockbuster season begins. Not much to say, other than I’ve been waiting for this movie since I was a kid. No pressure, Joss Whedon.

The Best Exotic Marigold Hotel (PG-13)
Starring Judi Dench, Maggie Smith, Tom Wilkinson
Written for the screen by Ol Parker
Directed by John Madden
If you’ve got your AARP card, this is the movie for you. Read my review for Pegasus News here.
PLAYING AT THE ANGELIKA PLANO and THE MAGNOLIA

Sound of My Voice (R)
Starring Christopher Denham, Nicole Vicius, Brit Marling
Written by Brit Marling & Zal Batmanglij
Directed by Zal Batmanglij
Been excited for this one since I read the rave reviews from Sundance 2011. The beautiful and supremely talented Brit Marling plays a cult leader amassing a following in the Valley. Christopher Denham is the skeptical journalist who goes undercover as a prospective new member. It only gets weirder and more intriguing from there.
PLAYING AT BOTH ANGELIKAS

Bernie (PG-13)
Starring Jack Black, Shirley MacLaine, Matthew McConaughey
Written for the screen by Richard Linklater & Skip Hollandsworth
Directed by Richard Linklater
Based on a true crime story in East Texas, Jack Black plays a nice, effeminate caretaker of a rich old bitch (MacLaine, perfect casting). One day she winds up mysteriously dead. Did Black do it? Was he even capable of doing something like that? The town sheriff (McConaughey) seems to think so. I’m expecting big things from this small movie.
PLAYING AT THE ANGELIKA PLANO and THE MAGNOLIA

A Little Bit of Heaven (PG-13)
Starring Kate Hudson, Gael García Bernal, Kathy Bates
Written by Gren Wells
Directed by Nicole Kassell
And thus we have reached the nadir of Kate Hudson’s once promising acting career. What began with an Oscar-nominated turn in Almost Famous has now ended with a rom-com opening unceremoniously at one theater in Mesquite. Hudson plays a horrible person who gets cancer and tries to find love and turn her life around before she dies. Good riddance.
PLAYING EXCLUSIVELY AT THE AMC MESQUITE 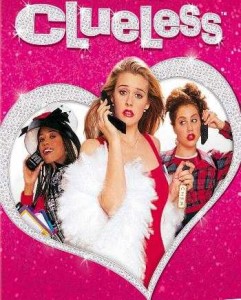 Clueless
Should you buy this if you already have the 2005 “Whatever! Edition”? As if. But if you don’t, you must own this essential ’90s comedy, whether your a Betty, a Baldwin, a Cake Boy or “a virgin who can’t drive.” Clueless, a very loose adaptation of Jane Austen’s Emma, was a movie both of and ahead of its time. I can almost quote this entire movie, so indulge me for a moment…

• “Y’know, if you did something that wasn’t 90% selfish, I’d die of shock.” “Oh, that’d be reason enough for me.”
• “He’s a disco-dancing, Oscar Wilde-reading, Streisand ticket-holding friend of Dorothy.”
• “And may I remind you that it does not say RSVP on the Statue of Liberty!”
• “It’s like Hamlet said, ‘To thine own self be true.'” “He didn’t say that.” “I’m pretty sure I remember Shakespeare.” “I’m pretty sure I remember Mel Gibson, and Hamlet didn’t say that. That Polonius guy did.”
• “Lucy, you know I don’t speak Mexican.” “I NOT A MEXICAN!” “Great. What was that about?” “Lucy’s from El Salvador.” “So.” “So, El Salvador’s an entirely different country… You get upset if people think you live below Sunset.”
• “My plastic surgeon doesn’t want me doing any activity where balls fly at my nose.” “There goes your social life.”
• “Anything happens to my daughter, I got a .45 and shovel. I doubt anyone would miss you.”
• “You like Billie Holiday?” “I love him!”
• “We don’t have tea, but we have Coke and stuff.” “No shit. You guys got coke here?!”
• “I’d like to thank my parents for never giving me a ride to school, the L.A. city bus driver for taking a chance on an unknown kid. And last but not least, the wonderful crew at McDonald’s for spending hours making those Egg McMuffins, without which, I might never have been tardy.”

To buy:
Comedy: Ralphie May: Too Big to Ignore