The Weekender: In the ‘Shadows’

Dark Shadows (PG-13)
Starring Johnny Depp, Michelle Pfeiffer, Helena Bonham Carter
Screen story by John August and Seth Grahame-Smith
Screenplay by Seth Grahame-Smith
Directed by Tim Burton
Depp and Burton have been dying (no pun intended) to get an adaptation of the soap opera off the ground for years now, though they’ve traded the morose tone of the original for something much campier. Depp plays Barnabas Collins, a vampire cursed in the 18th Century who awakens in the groovy 1970s. My hope is that their reverence renews their creative teamwork, instead of the check-cashing they’ve done in recent years. They’ve done some truly stellar work in the past, but there’s also this. And this.

The trailer was not embeddable. Please click the link below.
Girl in Progress (PG-13)
Starring Eva Mendes, Cierra Ramirez, Patricia Arquette
Written by Hiram Martinez
Directed by Patricia Riggen
So this is not the Latina version of Uptown Girls? Are you sure?

Darling Companion (PG-13)
Starring Diane Keaton, Kevin Kline, Dianne Wiest
Written by Lawrence & Meg Kasdan
Directed by Lawrence Kasdan
Yeah, so a bunch of old people go looking for an adorable dog. What happened to interesting Lawrence Kasdan? That’s whom we should be looking for.
PLAYING AT THE ANGELIKA PLANO and THE MAGNOLIA

The Road (R)
Starring Carmina Villaroel, Rhian Ramos, T.J. Trinidad
Screenplay by Aloy Adlawan & Yam Laranas
Directed by Yam Laranas
Slightly less depressing than the Cormac McCarthy adaptation is this Filipino slasher about three teens who get sliced to bits on a rural road. They ran afoul of a curse that has plagued this stretch of highway for 20 years. Whoops.
PLAYING EXCLUSIVELY AT THE ANGELIKA DALLAS 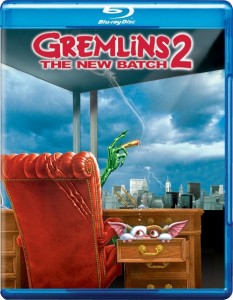 Gremlins 2: The New Batch
You know it’s a slow week on the home front when this so-so sequel is your best bet. Still, for a pop culture junkie like me, seeing the creepy Gremlins pull out their best celebrity impressions did a number on me as a kid. It’s nowhere near as frightening or funny as the original, but the gentle media satire and more anarchic tone works just fine.

To buy:
Comedy: Bobcat Goldthwait: You Don’t Look the Same Either