The Weekender: ‘Safe’ for now

Safe House (R)
Starring Denzel Washington, Ryan Reynolds, Vera Farmiga
Written by David Guggenheim
Directed by Daniel Espinosa
Denzel basically elevates every movie he’s in, though he can’t always save some serious stinkers (The Preacher’s Wife, The Taking of Pelham One Two Three). Safe House probably thinks it’s more clever than it actually is, but I have a hard time believing this CIA double-cross thriller will be anything but awesome.

The Vow (PG-13)
Starring Channing Tatum, Rachel McAdams, Jessica Lange
Story by Stuart Sender
Screenplay by Abby Kohn & Marc Silverstein and Jason Katims
Directed by Michael Sucsy
I hate this movie too much to write anything else about it. Read my review for Pegasus News here.

Journey 2: The Mysterious Island (PG)
Starring The Rock, Josh Hutcherson, Vanessa Hudgens
Story by Richard Outten and Brian & Mark Gunn
Screenplay by Brian & Mark Gunn
Directed by Brad Peyton
This quasi-sequel to Journey to the Center of the Earth (though closer to Jules Verne’s Mysterious Island) only brought back Josh Hutcherson but hey, there’s Michael Caine. And the Rock! (I’m sorry. That’s Dwayne Johnson.) So expect lots of family friendly 3-D nonsense in a movie kids will probably forget the second the credits roll.

Star Wars: Episode I – The Phantom Menace 3-D (PG)
Starring Liam Neeson, Ewan McGregor, Natalie Portman
Written and directed by George Lucas
Do you really want to pay $15 to see a movie you’ve already seen, but in 3-D? I mean, those fight scenes are still probably awesome, but do you need a reminder of the atrocity of Jar-Jar Binks and the reason Jake Lloyd quit acting?

2012 Academy Award Nominated Short Films Showcase*
Want to beat everyone in your Oscar pool? Seeing the live-action or animated short films gives you an edge. The only one I’ve already seen is the hilarious and inventive Time Freak, which takes the haywire chronology of Primer (2004) and plays it for laughs. The animated showcase features La Luna, a Pixar entry that will premiere later this year in front of Brave.
PLAYING EXCLUSIVELY AT THE MAGNOLIA

A Trip to the Moon*
One of the most groundbreaking films ever made, A Trip to the Moon still dazzles 110 years after its original release. It’s less than 20 minutes long, but still a technical marvel that makes you wonder how Georges Méliès ever pulled this off, given the limits of film in 1902. This screening will feature the soundtrack recently composed by French band Air.
PLAYING EXCLUSIVELY AT THE TEXAS THEATRE 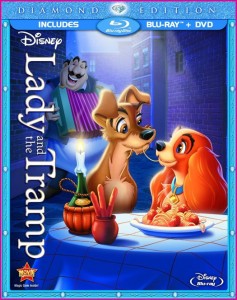 Lady and the Tramp
Easily in the upper echelon of Disney classics, Lady and the Tramp is still a masterpiece and perhaps its greatest love story. Disney likes to release and then pull its films from shelves without rhyme or reason, so make sure you get it as soon as possible. This is the first time the movie’s been available in five years and the first time it’s ever been on Blu-ray.

(All release dates and locations are subject to change.)