The Weekender: Pretty much ‘Dead’ Already

Evil Dead (R)
Starring Jane Levy, Shiloh Fernandez, Jessica Lucas
Screenplay by Fede Alvarez & Rodo Sayagues
Directed by Fede Alvarez
It’s hard to think of any movie from the last 35 years that needs to be remade less than Sam Raimi’s classic The Evil Dead. Horror remakes have a habit of pissing me off, but I’m slightly less indignant since Raimi and Campbell are producing. Still, there’s absolutely no reason this movie should exist.

Jurassic Park 3D (PG-13)
Starring Sam Neill, Laura Dern, Jeff Goldblum
Written for the screen by Michael Crichton and David Koepp
Directed by Steven Spielberg
I’ve finally made my piece with 3-D re-releases. Before home video made nearly every title accessible, popular and important films would often get second and third runs. Now, the only way a studio would give a film another shot years later would be if they could make more money off it, and sadly, the only way to do that nowadays is to offer it in 3-D. So is there a way I could get over my anti-3-D bias to see one of the most entertaining films ever made in the theater? “Uh, nature finds a way.”

The Sapphires (PG-13)
Starring Chris O’Dowd, Deborah Mailman, Jessica Mauboy
Written by Tony Briggs and Keith Thompson
Directed by Wayne Blair
This musical, based on the true story of an Aboriginal R&B group, recently swept Australia’s version of the Oscars. For American audiences who don’t remember that area of Australian history, there’s the big chance to see O’Dowd stretch himself beyond his Judd Apatow-related roles.
PLAYING AT BOTH ANGELIKAS and THE MAGNOLIA 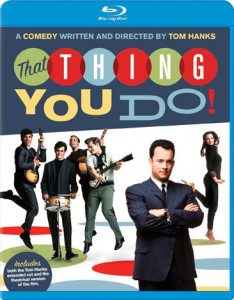 That Thing You Do!
One of the lost gems of the ’90s has finally gained the audience it so richly deserved through home video. Tom Hanks’ directorial debut is hilarious and sweet and filled with great tunes. Now it’s on gorgeous Blu-ray with both the theatrical and slightly controversial director’s cut. Despite its modest ambitions, this is truly a must-own movie.

To buy:
Comedy: Kristen Schaal: Live at the Fillmore