Man on a Ledge (PG-13)
Starring Sam Worthington, Elizabeth Banks, Ed Harris
Written by Pablo F. Fenjves
Directed by Asger Leth
I can’t help but be reminded of Devil, that one where all those folks were trapped in an elevator. “This could be interesting,” you think. Then you look at the calendar and realize good movies don’t come out around this time. Sam Worthington plays an ex-con who tries to prove his innocence in some sort of half-brained Dog Day Afternoon by David Blaine scenario where he stands on a ledge for a whole day. Meanwhile, his brother (Jamie Bell) is pulling off a heist, I think. It all seems way to convoluted for a movie that’s probably not all that smart.

Albert Nobbs (R)
Starring Glenn Close, Mia Wasikowska, Janet McTeer
Written for the screen by Glenn Close, John Banville
Directed by Rodrigo Garcia
By now, you’ve seen that this movie is up for three Oscars (four if the committee that decides the Best Original Song category hadn’t been so stingy). Close gets her sixth nomination as the title character, a woman posing as a man in 1910s Ireland. He’s become the best caretaker at a busy hotel, but dreams of a more quiet life. While the acting has received plenty of accolades (McTeer in fact gets her second Oscar nomination for a movie no one’s heard of), the consensus is that the movie’s pretty dull and it’s hard to care about anything that happens because Albert’s motivations never seem that authentic or his decisions that urgent. I’m too busy yawning to make a call one way or the other, but Close, like fellow Best Actress nominee Meryl Streep, always brings something marvelous to every performance.
PLAYING AT BOTH ANGELIKAS

Also opening:
The Descendants* (R) expands to wide release on the strength of its five Oscar nominations. 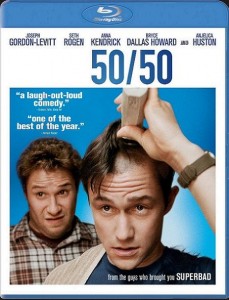 50/50 (93%)
The very best movie of 2011 until I saw Tree of Life, 50/50 left quite an impression on me. Joseph Gordon-Levitt gives his best performance since Mysterious Skin as the 20-something cancer patient dealing with his illness with a group of friends all poorly equipped to help him through it. But 50/50 is also ferociously funny, thanks to Seth Rogen, giving the best performance of his career by a mile. This film takes you through the wringer and that’s why I simply cannot recommend it highly enough.

To buy:
Music: Celtic Woman: Believe, U2: From the Sky Down*, Tom Waits: Complete Review

Criterion: Godzilla, The Moment of Truth