Casa de Mi Padre (R)
Starring Will Ferrell, Gael Garcia Bernal, Diego Luna
Written by Andrew Steele
Directed by Matt Piedmont
Grindhouse movies may be passion projects for big Hollywood players, but none ever transfer to box office success. And even Ferrell would admit he doesn’t have the draw he used to, so expect a lot of confusion over this move: a Spanish-language action picture played for laughs. It’s impossible to determine how this one will turn out. It could be a sly homage to telenovelas, or it could be a crude, low-budget outing that pleases no one. Ferrell at least deserves some recognition for thinking outside box.

Jeff Who Lives at Home (R)
Starring Ed Helms, Jason Segel, Susan Sarandon
Written and directed by Jay & Mark Duplass
You either love or hate the Duplass brothers. You find their offbeat comedies hilarious and touching, or dull and grating. Not a whole lot of middle ground. I found their last outing, Cyrus, to be an underrated gem. It took a creepy premise and made all the characters endearing. I’m expecting similar results here, as Jason Segel plays the titular hero, who teams up with his brother Pat (Helms) to catch Pat’s cheating wife.

Seeking Justice (R)
Starring Nicolas Cage, January Jones, Guy Pearce
Story by Todd Hickey and Robert Tannen
Screenplay by Robert Tannen
Directed by Roger Donaldson
Years from now, when everyone catches up to the idea that no one should put Nicolas Cage in a movie because 1) He’s terrible, and 2) He can’t open a movie anymore, Nic will watch this and realize he should have fired both his agent and his hair stylist long ago. Sporting a hideous Van Dyke, he plays a grieving husband who agrees to allow a stranger (Guy Pearce) have a friend “take care of” the guy who raped and beat his wife (January Jones, who after Unknown and X-Men: First Class should see if she can play the lover of someone her own age). As is the case with every Nicolas Cage movie ever, NOTHING IS AS IT SEEMS and so he must run, clutching his pistol, his toupee flopping in the wind, trying to regain something that’s been taken from him.

Chico & Rita (NR)
Starring the voices of Mario Guerra, Limara Meneses, Eman Xor Ona
Written by Ignacio Martinez de Pison, Fernando Trueba
Directed by Fernando Trueba, Javier Mariscal, Tono Errando
One of the more pleasant surprises among this year’s Oscar nominees was Spain’s Chico & Rita, a hand-drawn foreign-language romance, beating out Pixar’s Cars 2. The story follows the characters across the years as they meet, fall apart and reconnect, all the while chasing dreams of musical fame. Surely more vibrant than most animated films, this one’s high on my “Must See” list.
PLAYING AT THE ANGELIKA DALLAS 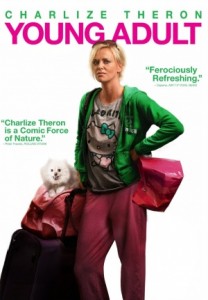 Young Adult (81%)
Jason Reitman has only been making features for a little more than five years, and he has yet to produce anything less than a masterpiece. His latest reunites him with Juno screenwriter Diablo Cody, and while that movie was sarcastic yet sweet, Young Adult is all sour. In a great performance awards-giving bodies will regret not recognizing, Charlize Theron plays an alcoholic children’s book author who returns to the small town she left behind to reclaim her past love (Patrick Wilson), a new dad. Even better is Patton Oswalt, who plays an old classmate who never got to move outside the city because of a traumatic assault. If this all sounds depressing, it isn’t. There’s no room for regrets in this movie, just a hilarious, uncomfortable portrait of a woman trying to find where the grass is greener.

To buy (click the link to watch on Netflix):
Music: The Swell Season