The Weekender: Is there life on Mars?

John Carter (PG-13)
Starring Taylor Kitsch, Lynn Collins, Mark Strong
Written for the screen by Andrew Stanton & Mark Andrews and Michael Chabon
Directed by Andrew Stanton
Sadly, the deck is stacked against this film. With a budget rumored to top $250 million, the pressure is on for Andrew Stanton’s leap to live action. Personally, I’m quite excited for this adaptation of Edgar Rice Burroughs’ Princess of Mars. As Mission: Impossible – Ghost Protocol proved, Pixar’s bullpen is more than capable of delivering first-rate action film with plenty of visual style, propelled by Michael Giacchino’s terrific music. To sum up the plot: Civil War vet John Carter (Kitsch) wakes up on another planet and is thrust into leading a battle against its tyrannical leader. You can watch the first 10 or so minutes here.

A Thousand Words (PG-13)
Starring Eddie Murphy, Kerry Washington, Allison Janney
Written by Steve Koren
Directed by Brian Robbins
Filming for Murphy’s latest disaster ended in 2008, and it’s finally ready for its quick box-office death. Murphy plays a fast-talking agent who only has 1000 words left to say before he dies. Expect lots and lots of mugging, smothered in sentimentality. Think of this as the final nail in the coffin in Eddie Murphy’s film career.

Silent House (R)
Starring Elizabeth Olsen, Adam Trese, Eric Sheffer Stevens
Screenplay by Laura Lau
Directed by Chris Kentis, Laura Lau
I’m a little miffed we’re getting this American remake before the original Uruguayan horror film gets released, but here we are. Olsen stars as a woman trapped in a lake house in a real-time thriller. She’s a capable actress, but this material probably got botched in translation. I’d still rather see the original, which was allegedly filmed in one take.

Friends with Kids (R)
Starring Jennifer Westfeldt, Adam Scott, Kristen Wiig
Written and directed by Jennifer Westfeldt
A well-written romantic comedy for adults? Say what?! Westfeldt and Scott play friends who have a child together without trying to be romantically entangled. The cast (including Maya Rudolph, Chris O’Dowd and Jon Hamm) is great and if the script pulls off the tricky subject material, this could be the grown-up date movie of the year.

Being Flynn (R)
Starring Paul Dano, Robert De Niro, Julianne Moore
Written for the screen and directed by Paul Weitz
Based on Nick Flynn’s much more creatively titled memoir Another Bullshit Night in Suck City, Dano stars as the author who reconnects with his father (De Niro), whom he discovers at a homeless shelter. Dear old dad is an alcoholic but also might be one of America’s greatest living writers. Their tough relationship should provide the basis for great drama. Weitz takes a cue from his brother Chris, taking the huge paycheck he got for directing a crappy sequel and using it to work on a much smaller, personal project.
PLAYING EXCLUSIVELY AT THE ANGELIKA DALLAS 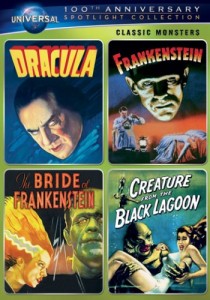 Classic Monsters Spotlight Collection
Universal’s going all out with their centennial celebration, releasing tons of catalog DVDs and Blu-rays. This collection – which retails for less than $20 – gathers the big iconic monsters into one package: Dracula, Frankenstein, Bride of Frankenstein and the Creature from the Black Lagoon. No Wolf Man, but you have to admit this is a great deal.