The Weekender: I didn’t even have to use my AK. I guess it was a ‘Good Day’

A Good Day to Die Hard* (R)
Starring Bruce Willis, Jai Courtney, Sebastian Koch
Screenplay by Skip Woods
Directed by John Moore
More than any of the other Expendables co-stars’ ’80s flashbacks, this one captures the gun-shootin’, joke-crackin’ spirit to which they’re trying to hearken. It’s no better and maybe a little bit worse than Live Free or Die Hard, but it’s still an entertaining romp that gets to use its R rating (but only a little bit).

Beautiful Creatures (PG-13)
Starring Alice Englert, Emma Thompson, Jeremy Irons
Written for the screen and directed by Richard LaGravenese
For this adaptation, which the studio wants to be the next Twilight, to succeed, it’s going have to go full camp. If it walks the line between serious and silly, it’s going to be a bad time for all involved. If I have to hear Emma Thompson with a bad Southern accent, some of those laughs ought to be intentional.

A Glimpse Inside the Mind of Charles Swan III (R)
Starring Charlie Sheen, Jason Schwartzman, Bill Murray
Written and directed by Roman Coppola
Despite poor reviews and weak box office, I still hold out hope for this ultra-hip romantic dramedy from a peer of Michel Gondry, Spike Jonze, et al. It’s been more than a decade since Roman sat in the director’s chair with his debut CQ. His latest concerns a graphic designer (Sheen) who re-evaluates his rakish ways after his girlfriend leaves him. Art imitating life? Maybe, but no matter what it’s going to look real purty.
PLAYING AT BOTH ANGELIKAS 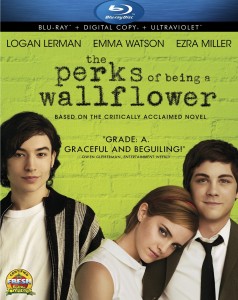 The Perks of Being a Wallflower (85%)
I could easily recommend Skyfall, which in my opinion is the best Bond since Goldfinger. But with over a billion in box office receipts, it doesn’t need my help. So I’d rather focus on an under-the-radar movie this week. Stephen Chbosky’s adaptation of his own novel should have been up for Best Adapted Screenplay, if nothing else. It’s one of the best—if not the best, at least in terms of its accuracy—high school movies ever made, and will hit you harder the more recently you graduated. It’s a must-see, but bring the tissues.

Criterion: The Kid with a Bike