The Weekender: ‘God Bless’ us, every one

Men in Black III (PG-13)
Starring Will Smith, Josh Brolin, Emma Thompson
Screenplay by Etan Cohen
Directed by Barry Sonnenfeld
Men in Black was one of my favorite movies growing up and Will Smith is one of Hollywood’s most bankable stars. So why am I not that excited for this second sequel, one that adds Josh Brolin AND Emma Thompson? Because it feels like no one’s heart is in this one. It’s only for the money. That’s going to be a big problem when the movie cost a reported $375 million (including marketing) and the potential audience seems as unenthusiastic as me.

Chernobyl Diaries (R)
Starring Jesse McCartney, Devin Kelley, Olivia Dudley
Story by Oren Peli
Screenplay by Oren Peli and Carey & Shane Van Dyke
Directed by Brad Parker
More found footage nonsense, this time featuring a group of American students (because otherwise we wouldn’t be worried about them) who sneak into the condemned Chernobyl area and find some mutants/zombies/creatures, but probably not until the last 10 minutes, because we’ve got 70 minutes of them arguing to pad out the run time.

God Bless America (R)
Starring Joel Murray, Tara Lynne Barr, Mackenzie Brooke Smith
Written and directed by Bobcat Goldthwait
Now here’s one I’ve been excited about for a long time. Comedian and uncompromising director Bobcat Goldthwait riffs on The Professional and Badlands as cancer patient Joel Murray goes on a cross-country road trip to kill all of America’s lowest life forms, including spoiled 16-year-old girls, reality TV stars and people who intentionally take up two parking spaces. It could be a mess, but you certainly won’t see anything like it this year.
PLAYING EXCLUSIVELY AT THE TEXAS THEATRE (Also available VOD) 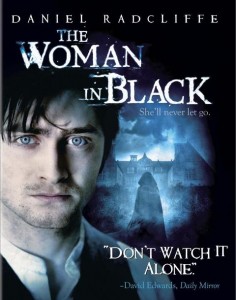 The Woman in Black (65%)
Unlike last year’s Don’t Be Afraid of the Dark, this is a haunted house movie that got it all right. The Woman in Black toys with you the whole time, offering up plenty of genuine scares. This is a good one to rent and watch with the lights out.

Blu-ray: Castle in the Sky, Whisper of the Heart, Lethal Weapon: The Complete Collection