As always, it’s open season on Twitter to discuss these shows with me.

“Chapter Eight” (A)
Frank visits his alma mater for a library dedication and ends up pondering his life. His drunken reunion with his choirmates are perhaps the best this show has done, even if they had nothing to do with politics or backstabbing. There are subtle lines that allude to Frank’s relationship with one of the guys, but it’s less about Frank’s sexuality and more about the empty man he’s become. What he felt with his friend all those years ago was more intense than any emotion he feels now, no matter how much he denies it. Seeing that vulnerability makes this the best episode of the show so far. 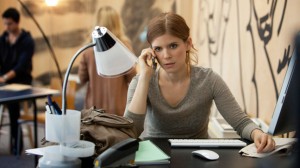 “Chapter Nine” (B)
One of the difficult things about this show is knowing how much little meetings will affect later episodes. Perhaps that’s intentional, giving the binge model of Netflix. But it’s a little frustrating in the here and now. The legislation Peter’s gubernatorial campaign has staked its future on dies by two votes, two votes Claire was supposed to secure but intentionally discouraged, all because she had to make a back-alley deal to get her water filters out of the hands of the South Sudanese government. But did she have to steer the two Democrats away? Going back on a deal can be a death sentence in Washington, but it seems more like she did it out of pettiness to get back at Frank for not caring quite as much about her passions as he does about his own. This was all pretty fascinating, but I’m starting to think this show is falling victim to one of the same problems that plagued The Following: it appears to be building to something more intense and captivating, but once it’s arrived there, it’s clear the build-up was more riveting. That doesn’t bode well for the last four episodes, all of which I plan on finishing next week. “A Girl Named Pixley” (C+)
What do you do when you don’t have a show to put on? Write about how you don’t have anything to write about? Sorry, that’s not gonna fly with me Sorkin. There’s a way to make a boring situation interesting, but he didn’t pull it off in this episode. 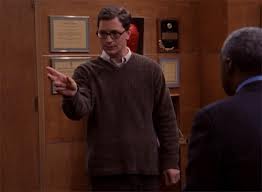 “The Giants Win the Pennant! The Giants Win the Pennant!” (B+)
Watching the episode Tuesday night could not have been more timely. As Dan discovers, Isaac was in the bathroom during the Shot Heard ’round the World. It was a disappointing moment he didn’t think he would have missed, but he was preoccupied. Dan tells Dana not to miss such a historical moment with Casey because she’s so worried about her “plan.” It was a big personal moment, set against the backdrop of a major filibuster in the state Capitol. I had to turn Sports Night off so I wouldn’t miss it. 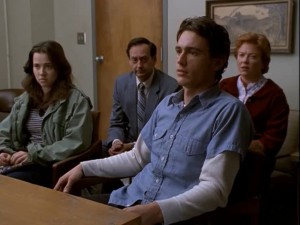 “Tests and Breasts” (A-)
One of the amazing things about Freaks and Geeks is how it takes standard After School Special scenarios and makes them fresh and realistic and hilarious. No episode so far has been done in such a way to make me think, “Oh, geez. Seen this before.” In this week’s episode, Lindsay helps Daniel cheat on a math test and Sam discovers pornography. Both stories could have been handled in trite or uncomfortable ways, but both end in ways I don’t think anyone would expect. James Franco’s acting is absolutely tremendous in this episode. His speech to Lindsay about being put with the dumb kids in sixth grade is heartbreaking. But when he repeats it verbatim in the principal’s office, it’s clear he’s rehearsed this plenty and trots it out only to get out of responsibility. Incredible. I’m starting to realize this is basically a hipper Wonder Years, but I am absolutely OK with that. 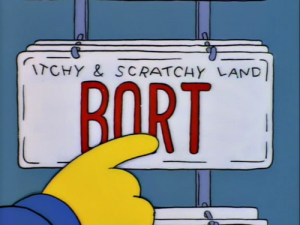 “Itchy & Scratchy Land” (B+)
I wouldn’t put it in the upper tier like many Simpsons fans, but this is an absolutely terrific send-up of amusement parks and the Disney culture. I’ve only re-watched three episodes of this season so far, but I’m pretty sure the jokes-per-minute ratio for this season is off the charts. I just wish they had more BORT license plates in the gift shop. 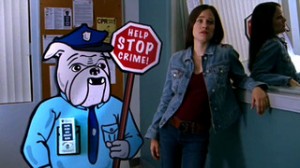 “Crime Dog” (A)
I’m finally starting to get it. After last week’s episode and this, Wonderfalls is finally in its groove. Too bad Fox canceled it before this episode aired. Although not as deep as last week’s crisis of faith, this episode was a lot more focused and took some ingenious narrative risks with what had been up until now straightforward in its storytelling. Jaye and Aaron’s daring attempt to smuggle their beloved housekeeper back into the U.S. after her deportation brings the siblings closer together and lets the show tweak the cop-show clichés we’ve all seen. It took a little longer than it was initially on, but Wonderfalls finally won me over.

Programming note: It’s possible many regular reviews will be on hold next week because of the holiday. How many? That remains to be seen.