“Homer Badman” (A-)
Even more great satire from the true masters. When Homer rips a rare gummi snack off the rear end of the babysitter, he ignites a firestorm in Springfield. “2! 4! 6! 8! Homer’s crime was very great! Great meaning large or immense. We use it in the pejorative sense!” Homer is certainly guilty of being slovenly, but not of sexual harassment. The parody of Hard Copy is easily among the funniest things the show has ever done, and I will always laugh uncontrollably at the title and clip of Homer S.: Portrait of an Ass-Grabber, starring Dennis Franz. 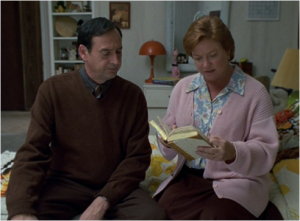 “The Diary” (A-)
The only criticism I have of this episode is that it tries to cram about one too many poignant, touching scenes. All of this — getting picked last for sports, having trouble relating to your parents, walking in on your parents getting freaky — relates more than usual, and it’s hard to take it all in. What an embarrassment of riches this show was. 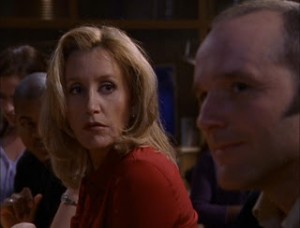 “La Forza del Destino” (A)
The end is nigh for Sports Night, in the first part of its very meta finale. The show never wallows in its impending cancellation, instead making everyone cheerful and genuinely good, something Sorkin’s always done well. 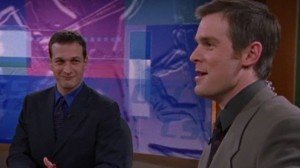 “Quo Vadimus” (A-)
The ending, as great as it is, comes across as too tidy. I easily called Clark Gregg’s true identity, but his question to Dana, “Where are we going?” hits effectively, another thing Sorkin is great at. I always wish there was more Sports Night to watch, but I’m eternally grateful for the trailblazing everyone here did. 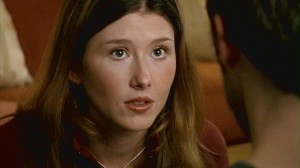 “Lying Pig” (A-)
This show has a lot of balls to essentially let the bad guy (in this case bad girl) win. Jaye was fundamentally unhappy when this show started, and now she’s possibly even more unhappy, as she lets Eric go just as she was starting to fall for him. Heartbreaking.