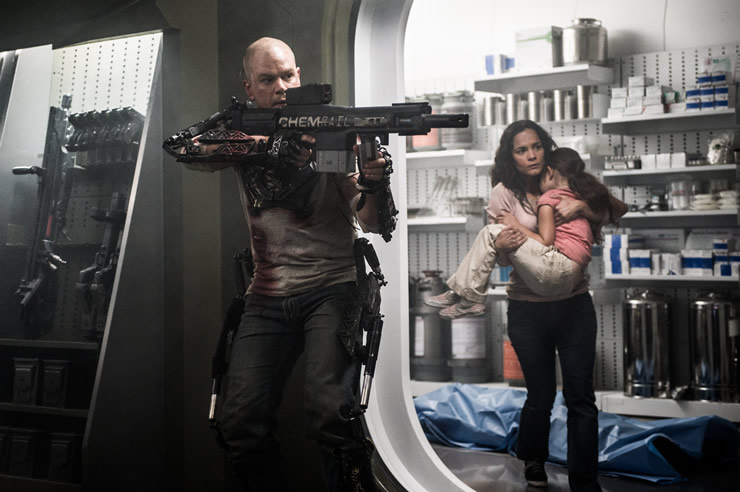 Every summer, I sit with anticipation, waiting for a summer movie that doesn’t require me to check my mind at the door, a movie that entertains but gives me something to mull over afterward. When Christopher Nolan’s not in the director’s chair, the season usually blows by without any blockbuster fully engaging me.

But Elysium had me hooked from the get-go. One of the biggest complaints against the film is that it’s not thoughtful enough. Yet the mere fact that it gives you anything to discuss beyond its “awesomeness,” is a revelation in and of itself.

In the distant future, all the wealthiest inhabitants of Earth fled for the space station Elysium. It’s hardly a coincidence that those who live up there are 99 percent white. Down below, it’s mostly Latinos. The Los Angeles of the future is like the Detroit of the future from RoboCop: it’s awful, but in a few years it will look like paradise compared to the actual city.

Matt Damon stars as Max, an ex-con working on the factory line. Though he’s long dreamed of moving up there, setback after setback has kept that dream out of reach. After a work accident leaves him dying of cancer, he agrees to pull a heist for local crime lord Spider (Wagner Moura) in exchange for phony credentials and a one-way ticket to Elysium.

As with almost every heist, things don’t go exactly as planned, and Damon finds himself being hunted by a completely amoral bounty hunter (Sharlto Copley), dispatched by Elysium’s defense secretary (Jodie Foster). Everything that comes after could be dismissed as “just an action movie,” but it’s executed so well, so much better than everything else this summer, that it doesn’t matter if we haven’t more fully explored this terrifying world.

Elysium is the inverse of District 9, which really was a drama with some action scenes. This is definitely an action movie with dramatic moments, and that’s fine. It’s not perfect, and a lot of aspects—particularly the acting—could be better. But this is the first blockbuster I’ve seen all summer that I’ve been able to say something more definitive than “pretty good.” This is first-rate entertainment. It’s got the firepower and the intelligence to back it up.

This entry was posted in Film, Reviews and tagged elysium, matt damon. Bookmark the permalink.