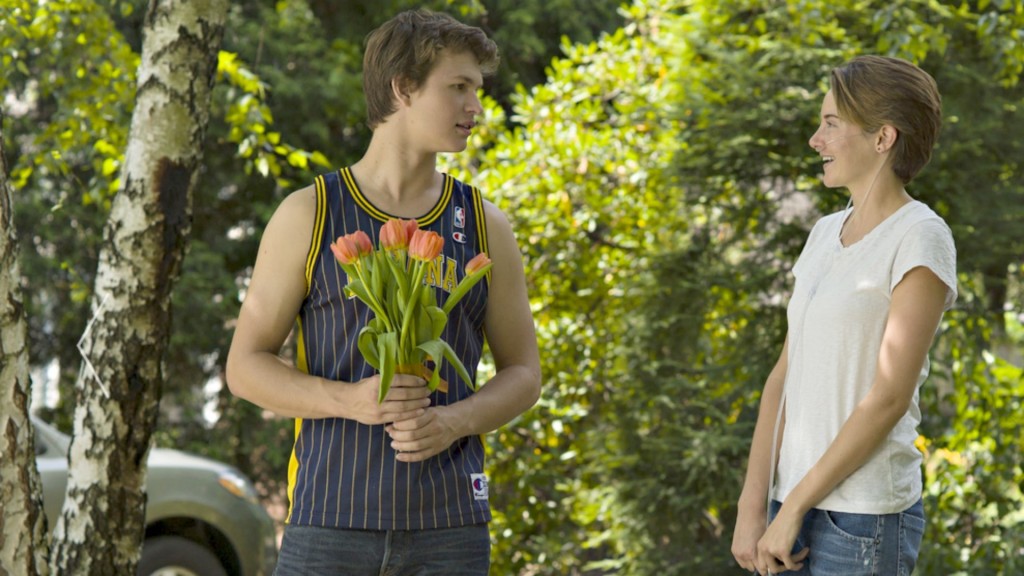 The fault in The Fault in Our Stars is that it claims in its opening narration that it’s going to avoid all the cliches and pitfalls of romance movies, that it won’t “be resolved with a Peter Gabriel song,” because life doesn’t work that way apparently.

There’s nothing wrong in the performances of Ansel Elgort and Shailene Woodley, but there’s also nothing wrong with their characters. Literally, nothing. These two are destined for sainthood within the first half-hour. And sure, we want them to succeed, but it’s also hard to relate when they’re essentially flawless.

Woodley, as Hazel, is relentlessly chipper and treats her parents like her roommates. We’re supposed to buy her as “ordinary,” but frankly, she’s superhuman. Nothing fazes her.

Elgort, as Augustus, feels even more fictional. He’s handsome, charming, good with parents, and somehow can arrange trips to Amsterdam like it’s nothing. He’s magical, saying the kinds of things only a handsome movie character could get away with (“There’s nothing you can do that can keep me away from you”).

Yet in spite of itself, the movie’s first half works well, as we watch them fall in love. It’s once they go to Amsterdam to meet Hazel’s favorite reclusive author (Willem Dafoe) that movie fails at every turn. Their encounter is awkwardly staged, and lets Hazel drop the movie’s lone, PG-13-ordained F-bomb. Plus, it never gels thematically. It feels like it’s from a different movie. Yes, life has difficult, unfinished moments that leave us wanting answers, but a brief epilogue — that I won’t spoil here — renders this scene especially pointless.

But even worse is the couple’s day spent touring Amsterdam, which culminates in a truly offensive scene at the Anne Frank House. Grace—who remember has lung cancer and has trouble breathing even though this has never been a problem up until this point in the movie—continues up stairs and ladders, room by room, encouraged to keep going by the pre-recorded voice of an actress reading Anne Frank’s diary entries.

When she finally makes it to the attic, she embraces Augustus and then they make out and people around them start slow clapping. Let me state that another way: These teenagers making out in the Anne Frank House and tourists are cheering them on. It would be romantic and inspiring were it not in the home of a girl who was hunted by the Nazis and has come to represent the millions of victims of the Holocaust.

Tragedy eventually creeps back in for the characters when they return to Indianapolis—which is defined solely by a casual reference to former Pacers center Rik Smits — but by then the damage has been done and any sympathy the movie hoped of earning has long sailed away.

After some more scenes of unearned pathos, The Fault in Our Stars ends on a note of hypocrisy. After spending two hours telling us that life doesn’t always resolve, that there’s not always closure with a song, the movie wraps everything up with M83’s “Wait,” hoping it will drain every last tear from our ducts. Maybe if the film had been truly authentic, instead of just pretending to be, it could have succeeded.

This entry was posted in Film, Reviews and tagged fault in our stars. Bookmark the permalink.