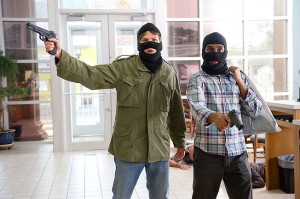 Nick (Jesse Eisenberg) and Chet (Aziz Ansari) are best friends and partners in crime in 30 Minutes or Less. (Columbia)

The second feature from Ruben Fleischer (Zombieland) ultimately comes down to pairings, and they both succeed.

As our heroes-by-default, Nick (Eisenberg) and Chet (Ansari) provide big laughs by exploring, as they put it in an interview, the “dark moments” of friendship. They insult each other, complain to each other and ultimately come to rely on each other in a moment of need.

See, two unemployed schmucks (McBride and Swardson) have strapped a bomb to Nick’s chest and ordered him to rob a bank. McBride–genius at these foul-mouthed Don Quixote roles–plans to use the money to hire a hitman to knock off his drill sergeant father (Fred Ward) so he can inherit the old man’s lotto winnings, which he will then use to start a tanning salon/brothel.

This kind of hair-brained scheme sounds straight out of a Coen Brothers or David Mamet movie, and a similar dark/quirky/ridiculous tone allows the movie the freedom to go in all kinds of bizarre directions. While the movie still ends more or less how you think it will, there are still plenty of “I-did-not-see-that-coming” moments along the way.

I was reminded throughout–and not just because of the presence of Michael Peña, Danny McBride and Aziz Ansari–of Observe and Report. Like that movie, 30 Minutes or Less grows darker and more bizarre as the movie goes along yet never loses sight of its primary goal: providing laughs. Moreover, both films succeeded where Pineapple Express failed. In particular, this buddy caper balances the tones much better and will likely end up as one of the most quotable movies of the year.

Inevitably, 30 Minutes or Less is a movie that will work much better at home, where you can be surrounded by your friends, some delivery pizza and the impairment of your choice. It’s funny enough not to need all those things, but they will all improve your viewing experience.