Hit to Death in the Future Head 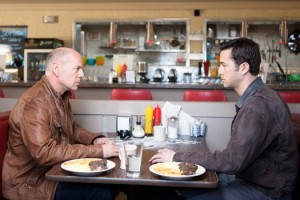 Yeah, this movie’s not all shoot-outs. (TriStar)

Most Bruce Willis action movies require you to check your brain at the door before you enter the theater. Looper ensures you have it and use it at all times.

Joseph Gordon-Levitt, sadly still underrated, plays Joe, a stylish hitman known as a “looper.” He kills mob enemies sent from the future, ready for him to dispatch. His contract states he’ll eventually have to “close the loop” by killing his future self. But that process becomes more complicated when he gets that last assignment and finds himself face-to-face with the man he will become (Bruce Willis).

Older Joe escapes and in organized crime, failure means death. So the loopers’ boss (a scruffy Jeff Daniels) sends his minions out to find both Joes. One of many great examples that Looper is operating on a different level is what happens next. They don’t team up to slay some bad guys, or time travel together. Instead, even as Joe is trying to kill his older self in a diluted attempt to get back in the mob’s good graces, his older self tries to help him survive, not only because his own life is at stake, but also to keep Joe from making the same mistakes again.

In fact, that’s primarily what Looper is about: how much of our future do we own, and how much of it is already laid out for us? That’s an old question, but Looper answers it in new and thrilling ways.

What really sold me on Looper though, was its deliberately paced second half. Sure, the first half is ultra-stylish and entertaining. But the second half—in which Joe hides out on a farm, both to avoid those tracking him and to trap his older self—really blew me away. There are so many twists that come, as we learn more about Joe, as well as the woman who’s hiding him (Emily Blunt, never better) and her son (Pierce Gagnon, a revelation).

To discuss the plot any more would be to give away far too much. But Looper remains thrilling throughout and thematically rich to boot. It’s that all-too-rare Hollywood movie: one that blows up stuff real good, but after the smoke clears asks you to consider how your simple choices can have extreme consequences—both good and bad.