“Homie the Clown” (B+)
God bless Krusty. Along with Moe and Mr. Burns, they make up a trio of despicable men, who still provide some of the series’ biggest laughs. Krusty, yet again, has found himself short on cash. This time, it’s not creditors or lawyers he owes, but Fat Tony. His jam forces him to create “regional Krustys,” fat, drunk buffoons to do restaurant openings and the like. And who’s a fatter drunker buffoon than Homer? This leads to a hilarious case of mistaken identity as Homer is kidnapped by Fat Tony after numerous failed assassination attempts. Still, the funniest moments — and this probably says more about me than anything else — involve people on fire caused by Homer’s negligence. 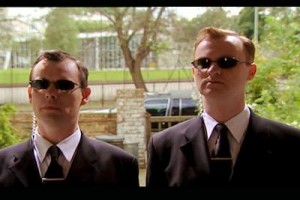 “Back” (B+)
Though lacking the emotional resonance of “Ends,” this is yet another perfectly executed pop-culture parody. This time, The Matrix is the target of Spaced‘s affection, and I’m so thoroughly in love with this show that I completely had to go along for the ride, even if such a detour seems horribly dated. Also, it must be noted how great Juliet Stevenson looks after losing that weight (not that she ever looked bad before) and how much sharper the cinematography is. 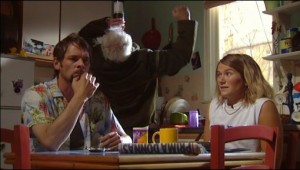 “Change” (A)
Too many sitcoms focusing on 20-somethings have made all their characters improbably wealthy, leaving all the great stories to be told about those scraping by unexplored. Not Spaced. It manages to find the humor in unemployment and underemployment, and still keeps its heart intact. Spaced is many things, but it is never cynical, even when it’s characters can be. 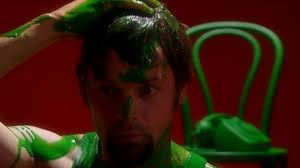 “Mettle” (A-)
Brutal. Just brutal. That’s how I regard Daisy’ story in this episode. Still, it’s a spot-on One Flew over the Cuckoo’s Nest parody, in which she finds out all her fellow oppressed dishwashers are writers themselves. I’m less crazy about Tim and Mike’s Robot Wars/Fight Club bit, but that’s mainly because it feels incredibly dated. Still, it’s hard not to be giddy along with them. Oftentimes this show feels like what a boy between the ages of 6 and 12 would put on if he had the means and technique. And the Art World satire continues to be spot on.

This entry was posted in Reviews, Television and tagged netflix, simpsons, spaced. Bookmark the permalink.