Back in time, back to basics 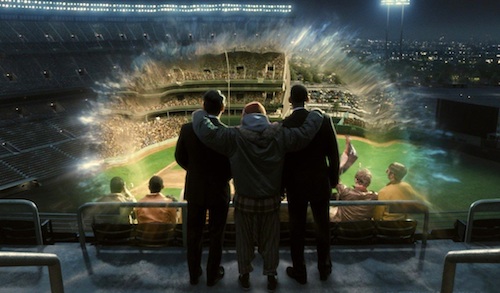 It’s been nearly four years since Will Smith has appeared on screen, 10 years since the mostly terrible Men in Black II hit theaters (I’ve since neuralyzed all memories of it). As such, my expectations for this sequel were pretty low. But low expectations work to the film’s advantage.

After an alien shootout that opens the film, a drunk Agent K (Tommy Lee Jones) calls Agent J (Smith) at home to ask him, “You know what the most destructive force in the universe is?” “Sugar?” J retorts. “Regret,” responds K.

The next morning, J heads to work with K nowhere in sight and everyone looking at him as if he was an alien roaming the halls when he asks where K is. Turns out K’s arch-nemesis Boris (an unrecognizable Jemaine Clement) has broken out of prison and traveled back in time to 1969 to kill K. So J travels to the day before to hunt down Boris with the younger K (Josh Brolin).

Casting Brolin was a stroke of genius. Avoiding any awkward de-aging make-up or CGI, Brolin looks and sounds just like a younger Tommy Lee Jones, even feistier than Jones was in the first MIB.

The duo is back to their wise-cracking selves, even as their different policing techniques cause friction. It’s kind of like watching a remake of the first movie in a different setting, and that’s not a bad thing. The end of the groovy ’60s allows the suits to run into the freaks at Andy Warhol’s Factory and stage the climax at the Apollo 11 launch.

Aiding J and K in their manhunt is Griffin, the last surviving member of his alien race, who can see all possible outcomes at once. He’s played by Michael Stuhlbarg (A Serious Man) with warmth and joy. He knows the end could come at any second, but chooses to focus on the bright moments and hopes that the good will win out.

Early word was that MIB3 was the franchise’s Kingdom of the Crystal Skull, a too-late sequel that’s only intermittently fun, surprisingly stupid and ultimately worthless. Actually, it’s more like Ocean’s Thirteen, a fun jaunt that’s an attempt to make up for the failings of the first sequel while never living up to the original.

Part of the problem is the time-travel gimmick, which is used to conveniently aid our heroes, even though that violates the movie’s own time travel rules. That kind of sloppiness can happen when you start filming without a finished script and then bring in a few more guys to re-write those scraps of story.

That leads to another problem, one that’s a little harder to overlook. This new Men in Black just isn’t that funny. It’s entertaining and there are a few jokes, but compared with all the laughs the first film provided, that’s a little disheartening.

But the real star of this movie is Rick Baker, whose countless alien creations are all dazzling. That I expected. What I didn’t count on was the poignancy of the final scenes. To explain what happens would reveal too much, but it adds a new dimension to J and K’s relationship that’s truly touching.