An adrenaline rush that never quits 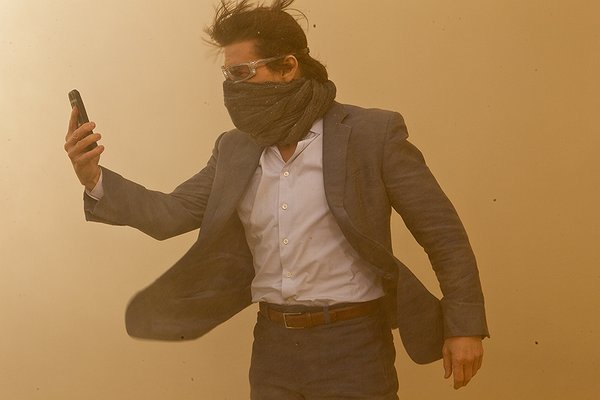 In one of Mission: Impossible – Ghost Protocol‘s spectacular setpieces – the one you’ve seen on TV – Tom Cruise (who just turned 49) is tethered to a spindle of fiber-optic cable, running along the side of the world’s tallest building and leaping into an open window a few stories below.

This scene (and many like it) provide an exceedingly rare feeling these days: it makes your heart jump into your throat. I haven’t felt anything like this since I saw Inception.

Were it just for this incredible sequence–shot on location in Dubai–the latest Mission: Impossible movie would be worth checking out. But Ghost Protocol has not one, but three or four jaw-dropping moments.

But Ghost Protocol goes beyond the technical wizardry, keeping us on our toes throughout by stripping away most of the coolness of the franchise. See, a terrorist nicknamed Cobalt has been a step ahead this whole time, even framing the team for a bombing at the Kremlin. Now, the whole IMF organization has been disavowed. Our three-man-one-woman crew has no back-up or tech support. And their gadgets seem to have been made by the lowest bidder.

This means the team has to rely solely on physical and mental strength to outwit an enemy that has completely blindsided them. The stakes of this Mission always feel sky-high. And that gives your brain a workout while your busy drooling over Robert Elswit’s awe-inspiring cinematography (and Paula Patton’s awe-inspiring body, too).

But as twisty as Ghost Protocol‘s script is, I wish the writers would have given a little more for Patton to do besides look amazing and kick some butt. Still, those are small potatoes when a movie is this exhilarating for more than two hours.

Back to that setpiece in Dubai for a moment: just as Cruise makes that incredible leap, the director Brad Bird has achieved a similar feat. Leaving Pixar to helm live-action films was a huge risk. He could have stayed at Pixar forever and made lots of great animated films. Instead, he jumped, confident in his own ability to perform. With Ghost Protocol, he’s more than proven himself. He makes it clear he could go anywhere from here.

Your mission, should you choose to accept it, is to get to a theater as quick as possible to see the most entertaining film of the year.