The Weekender: The Whole Wide ‘World’

Monsters University* (G)
Starring the voices of Billy Crystal, John Goodman, Helen Mirren
Story and screenplay by Robert L. Baird, Daniel Gerson, Dan Scanlon
Directed by Dan Scanlon
Slump? What slump? This prequel is one of the most playful and inventive Pixar movies in a while (unless you count Wreck-it Ralph, which could have easily been one). Its lesson is also an important one and far more valuable than the typical messages couched in these animated movies. Look for a review on this site in the next few days.

World War Z (PG-13)
Starring Brad Pitt, Gerry Lane, James Badge Dale
Screen story by Matthew Michael Carnahan and J. Michael Straczynski
Screenplay by Matthew Michael Carnahan and Drew Goddard & Damon Lindelof
Directed by Marc Forster
Zombies on an epic scale deserves an R rating to fully explain the horrors of such an apocalyptic nightmare, but Brad Pitt and his scarf have to sand the rough edges down to get to a PG-13. Fans of Max Brooks’ faux-oral history deserve better.

The Bling Ring (R)
Starring Katie Chang, Israel Broussard, Emma Watson
Written for the screen and directed by Sofia Coppola
As usual, Coppola’s films are beautiful to look at, but mostly empty. I can never tell if that’s the point. There are some gorgeous individual scenes, but the film gets repetitive in a hurry and isn’t as sharp in its satire as it thinks it is.
PLAYING AT THE MAGNOLIA and CINEMARK WEST PLANO

Much Ado About Nothing (PG-13)
Starring Amy Acker, Alexis Denisof, Nathan Fillion
Written for the screen and directed by Joss Whedon
Modern Shakespeare from Whedon’s Wheelhouse? You know I’m there.
PLAYING AT ANGELIKA DALLAS and CINEMARK WEST PLANO

Pandora’s Promise (NR)
Directed by Robert Stone
Oh, great. Another energy documentary. But this one has unique twist. Instead of fundamentally decrying a controversial energy source (in this case, nuclear power), it looks at multiple sides of the issue, particularly its potential to help solve the energy crisis and bring millions out of poverty. Too good to be true? You’ll have to see to find out.
PLAYING AT ANGELIKA DALLAS 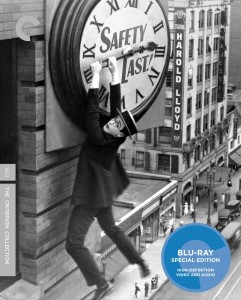 Safety Last! (The Criterion Collection)
Like his contemporary Buster Keaton, Harold Lloyd was a daredevil with a penchant for the melancholy. Safety Last! features his most death-defying stunt: a wire-free climb up a clock tower. The scene is the most well-known of his career but the whole feature is both hilarious and touching. It’s not my favorite Lloyd picture (that would be Girl Shy) but it’s still an essential piece of film history. As usual, Criterion’s treatment is second to none. You will never see the film look better than this.

To buy:
Music: Glastonbury: The Movie – In Flashback