I started calling this a “hangout,” so let’s make that happen. If you’d like to chat about any of these episodes, or throw in suggestions for shows you’d like me to cover in the future, reply to me on Twitter (@kipjmooney). 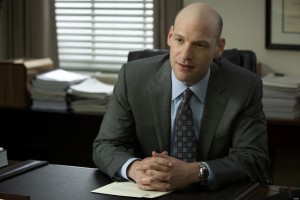 “Chapter Six” (B+)
Boy, is this show clumsy when it comes to capturing the current zeitgeist. Frank’s gaffe on CNN leads to an awkward AutoTune the News segment, and later Frank asks “How many characters in a tweet?” But it eventually pays off in glorious fashion as Frank cripples Spinella in a truly horrifying scene. Frank may not be quite as evil as Walter White, but he’s getting there, and the show’s all the better for it. 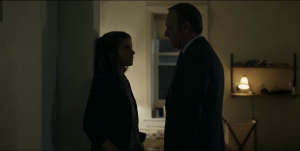 “Chapter Seven” (A-)
Peter’s campaign for governor starts gaining steam as every character starts their own manipulation games. The internal research guy — the one who looks into every dark corner of the candidate’s personal life — is chilling, and the perfect motivation for Peter to start playing up more sympathetic angles on his public road to recovery. Also, the show scores bonus points (for scariness) by turning its final scene from sexy to creepy in the span of about 20 seconds. 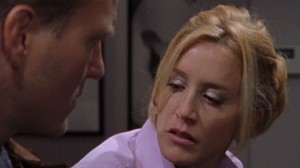 “Kyle Whitaker’s Got Two Sacks” (B)
As much as I love Aaron Sorkin’s writing, sometimes there’s just too much of it. Dan’s anxiety storyline has worked better in the quieter moments. When he’s constantly calling attention to one of the ways his anxiety manifests itself—in this case, excessive flirting—it’s overdone, and the impact is diminished. But the rest of this episode, the first time the show has tackled (no pun intended) PEDs, is a real gut-punch in the final minutes. 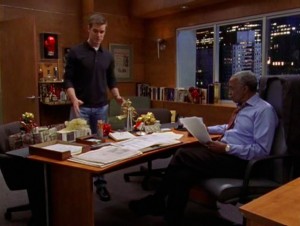 “The Reunion” (A-)
I’m a big softie when it comes to Christmas episodes, and this one is no exception. With Dana’s brother under investigation for steroids, she plans to be the latest person to jump on his case. But after taking Casey’s sage advice, she backs off, offering him a shoulder to cry on and a little bit of encouragement. It only took three little words, but this season finally brought me to tears. “You look tired.” Felicity Huffman could not have played this scene any better. 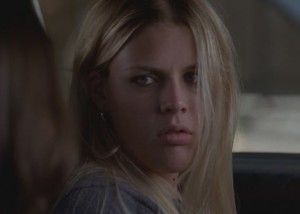 “Kim Kelly is My Friend” (A)
Easily one of the most unsettling episodes of television I’ve ever seen, especially for a comedy. Kim—let’s just use this word—is a total bitch tries to be nicer to Lindsey at Nick’s request. She invites her over for dinner at her parents’ house and warns Lindsey they’re “a nightmare,” which Lindsey only takes to mean a little strict or uncool. No, the nightmare is real. Her parents are abusive monsters, adding some context to a character who up until now had been cruel for absolutely no reason. It doesn’t justify her rudeness, but illustrates how her constant put-downs are merely defense mechanisms for an unbelievably horrific home life.

I don’t do clip shows. 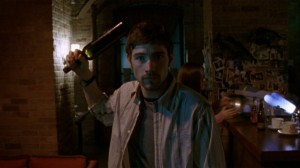 “Wound-Up Penguin” (A-)
Like its contemporary Joan of Arcadia, Wonderfalls is ultimately a show about faith. That gets literal in this week’s episode when Jaye helps a wayward nun. I still haven’t completely fallen in love with this show, but the warmth and respect underneath the cynicism and contempt are inching me closer to it.