The Weekender: No way out

The Cabin in the Woods (R)
Starring Chris Hemsworth, Richard Jenkins, Bradley Whitford
Written by Joss Whedon & Drew Goddard
Directed by Drew Goddard
I’m definitely against trailers giving away everything. But shouldn’t a trailer at least give you some idea what’s going on? Cabin in the Woods’ preview only sets up a “weird things happen here” plot. And maybe that’s for the best. Co-written by Joss Whedon and starring Chris Hemsworth, long before either shot The Avengers, Cabin in the Woods fell victim to MGM’s financial woes. Will this be a clever twist on the horror genre—a genre badly in need of a hit that’s not part of a franchise—or a tremendous flop like My Soul to Take? Either way, Whedon and Hemsworth will be rolling in Marvel dough in a month’s time.

The Three Stooges (PG)
Starring Sean Hayes, Will Sasso, Chris Diamantopoulos
Screenplay by Mike Cerrone and Bobby & Peter Farrelly
Directed by Bobby & Peter Farrelly
Has a more beloved property ever been saddled with a more pathetic looking adaptation? I can’t think of one. The Farrelly Brothers (who have so thoroughly fallen out of good graces that they’re returning to the film that made their name) direct the trio in a series of vignettes that may be faithful to the good-natured eye-poking of the original but can’t look more desperate in 2012.

Lockout (PG-13)
Starring Guy Pearce, Maggie Grace, Peter Stormare
Written by Stephen St. Leger & James Mather & Luc Besson
Directed by Stephen St. Leger & James Mather
One of the most ridiculous movies to come along in quite a while, Lockout is basically Taken/Die Hard/Escape from New York… IN SPACE! The effects are atrocious, the villains aren’t that scary and there are more plot holes than you can imagine. But it’s also a lot of fun. Read my review for Pegasus News here.

Friday the 13th also marks the beginning of the Dallas International Film Festival. Check the official site for all the details.

Check out movies playing in limited release after the jump…

Blue Like Jazz (PG-13)
Starring Claire Holt, Marshall Allman, Tania Raymonde
Written for the screen by Donald Miller, Ben Pearson, Steve Taylor
Directed by Steve Taylor
This is a movie I deeply want to love, but the trailer leads me to believe it’s a pretty standard coming-of-age drama. Donald Miller’s memoir of his college days is deeply important to me and I know he poured a lot of himself into a movie that took years to complete. (He chronicles part of the attempt in A Million Miles in a Thousand Years.) It will almost certainly be better than anything Kirk Cameron or T.D. Jakes has thrown at the screen in recent years, but I’m demanding more from such an influential writer.
IN LIMITED RELEASE

Bully (PG-13)
Directed by Lee Hirsch
The consensus for the controversial documentary says that the movie fails to provide a complete picture of an issue as serious as this. Still, it’s a great starting point for a topic that has been incorrectly defined, handled and treated in recent years as reports of suicide seem to rise. The movie also represents a great victory against the wildly inconsistent MPAA, who originally refused to back down from its R rating for the film’s use of a few F words.
IN LIMITED RELEASE

Keyhole (R)
Starring Jason Patric, Isabella Rossellini, Udo Kier
Written by George Toles & Guy Maddin
Directed by Guy Maddin
Guy Maddin remains one of the most original directors working today. His last feature, a quasi-documentary about the history of his hometown of Winnipeg, was one of the most heartbreaking and bizarre things I’ve ever seen. His latest follows a gangster’s attempts to reunite with his wife. Oh, and their house is haunted. And the cops are on his tail. Can’t wait to see this one.
PLAYING EXCLUSIVELY AT THE TEXAS THEATRE 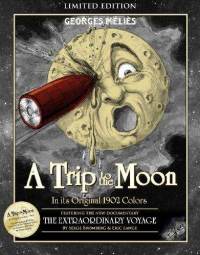 A Trip to the Moon (Restored)
One of early cinema’s most impressive achievements finally gets the high-def treatment it deserves. The Blu-ray set comes lavishly packaged and includes the original hand-colored print—meticulously restored by French and American experts—as well as several audio tracks, including the soundtrack composed by Air. This set is absolutely essential for any cinephile or RTVF student.

Blu-ray: Bounce*, The Boy in Blue, Don Juan Demarco, Kate & Leopold, A Streetcar Named Desire, Thou Shalt Not Kill… Except, The Truth About Cats & Dogs