Insidious: Chapter 2 (PG-13)
Starring Patrick Wilson, Rose Byrne, Barbara Hershey
Story by James Wan & Leigh Whannell
Screenplay by Leigh Whannell
Directed by James Wan
Continuing the meager scares of the original, James Wan is about to make himself the richest horror director ever. Good for him.

The Family (R)
Starring Robert De Niro, Michelle Pfeiffer, Dianna Agron
Written for the screen by Luc Besson and Michael Caleo
Directed by Luc Besson
I honestly don’t know for whom this movie exists. It’s got some formerly big names (including Tommy Lee Jones), but this mafia-in-exile tale is likely grimmer than its jovial trailers will acknowledge. My hope is that it’s fun-bad, not bad-bad. 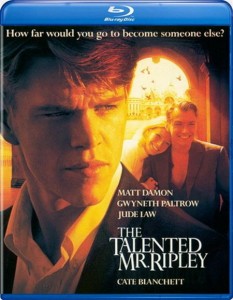 The Talented Mr. Ripley
1999 was an insanely rich year for film: Go, Drop Dead Gorgeous, Three Kings. And those movies were just some of the great films not even nominated for Oscars. One of the best of those vying for major consideration, but got lost in the shuffle of more traditional Oscar bait like The Cider House Rules, was the late Anthony Minghella’s absorbing thriller. What’s so engaging about it, despite having what I’d argue is the best cast ever assembled, is how Matt Damon as the title character seduces us so completely that we find ourselves rooting for him to get away with his grisly deeds. It’s an underrated performance from an underrated actor in an underrated film.

Criterion: La Cage aux Folles, The Spy Who Came in from the Cold