After Earth (PG-13)
Starring Will Smith, Jaden Smith, Zoë Kravitz
Story by Will Smith
Screenplay by Gary Whitta and M. Night Shyamalan
Directed by M. Night Shyamalan
This monumentally awful sci-fi is the final nail in Shyamalan’s coffin. Read my eulogy for his career at College Movie Review.

Now You See Me (PG-13)
Starring Jesse Eisenberg, Mark Ruffalo, Morgan Freeman
Story by Boaz Yakin & Edward Ricourt
Screenplay by Ed Solomon and Boaz Yakin & Edward Ricourt
Directed by Louis Leterrier
Can this puzzler about magician-thieves be as awesome as its trailer has led us to believe? With a cast that includes Michael Caine, Isla Fisher and Woody Harrelson, I’ll take the gamble either way.

Stories We Tell (PG-13)
Directed by Sarah Polley
Polley, already a critically acclaimed actress and director, has been getting more raves than ever for her engrossing, revealing documentary about her own family’s secrets.
PLAYING AT ANGELIKA PLANO and THE MAGNOLIA

Blancanieves (PG-13)
Starring Maribel Verdú, Daniel Giménez Cacho, Ángela Molina
Written and directed by Pablo Berger
Of all three Snow White movies that opened last year, this was the one I most wanted to see, mainly because I love everything Verdú does. Spain’s official Academy Award entry, a silent film no less, should dazzle more than the spectacle of the other two could possibly imagine.
PLAYING AT ANGELIKA DALLAS

We Steal Secrets: The Story of Wikileaks (R)
Directed by Alex Gibney
Gibney, on something of a roll lately, focuses his sharp eye on controversial publisher Julian Assange, who became a folk hero after releasing classified documents from world governments. The doc also focuses on the Bradley Manning, the private who released incriminating information against the U.S. military and wound up in jail.
PLAYING AT ANGELIKA DALLAS

Java Heat (R)
Starring Kellan Lutz, Ario Bayu, Mickey Rourke
Written by Conor & Rob Allyn
Directed by Conor Allyn
No thriller starring beefcake Kellan Lutz (Twilight) can be as smart as this film wants to be, as it pits an American ex-Marine and Indonesian detective against a European jewel thief working with Muslim terrorists.
PLAYING AT THE TEXAS THEATRE 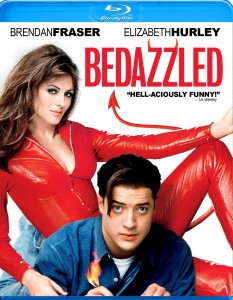 Bedazzled (2000)
So it’s come to this… My Top Pick is Bedazzled, a so-so comedy from 2000, one of the worst years for film ever. This remake of the much sharper 1967 satire swaps out Peter Cook for Elizabeth Hurley and Dudley Moore for Brendan Fraser. Significant downgrades in the laughter department, serious upgrades in the looks department. While there are occasional chuckles, and nothing egregiously awful here, there’s never any point to why Fraser finds his co-worker (Frances O’Connor) so irresistable or why they even cast Hurley in the first place (despite her obvious, ahem, assets) in a role as potentially juicy as Satan himself (or herself, in this case). But for some cheap, easy laughs, you could do a lot worse than this.