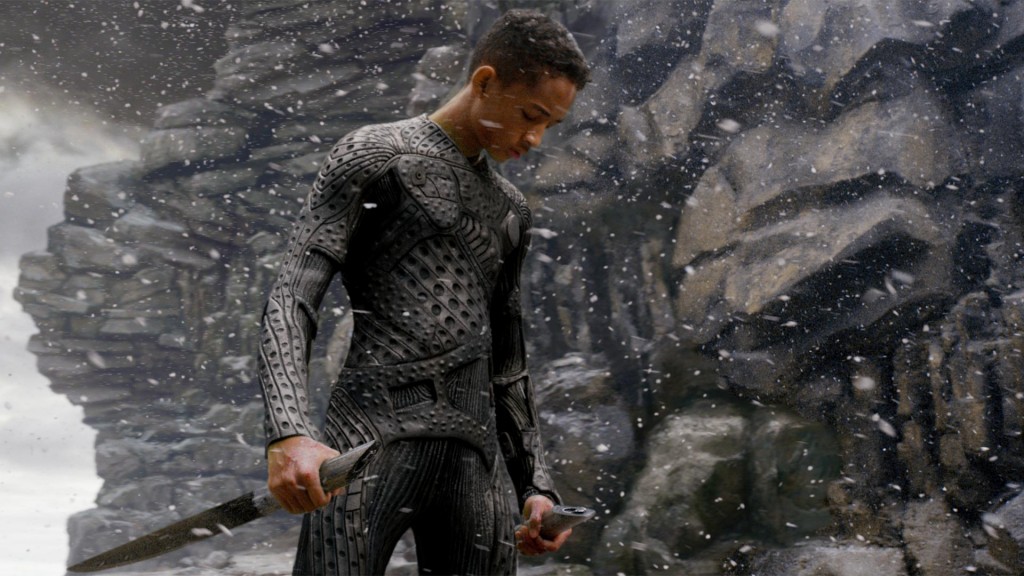 If M. Night Shyamalan was looking for redemption, he won’t find it here. In fact, After Earth is so monumentally terrible, it seems like the final nail in the coffin of his career.

Working from a story by Will Smith—I assume the story was just, “I want to take my son on vacation to a tropical island. Let’s make a movie while we’re there so we can write it off”—the gritty survival tale lurking within is sanded down to remove most of the brutality and turn this into a father-son bonding movie. Jaden plays the eager-to-please cadet and Will the hard-ass general. Neither is the least bit convincing.

Nothing in this movie is, either. Their spaceship (which looks even cheaper than the vessel from Firefly, a 2002 TV show) crashes on earth, which has been abandoned and is now overrun by savage beasts. The problem is every animal is a CGI creation. This means none of the tension that comes from facing down one of these things exists at all.

The weight of the movie rests on Jaden’s shoulders since he’s in nearly every scene. That’s a huge miscalculation because he’s simply not ready for the lead. He could try again in a few years, but this is not something to put on the demo reel. The only reason he’d ever get another audition is because of his famous dad.

One of the many poor choices made in the making of this film was the accent everyone seems to have. It ranges from South African to British to Antebellum South in the same sentence. There’s absolutely no need for it and it drags an already weak movie further down.

So if the story and acting are going to be weak, at least the effects will be good, right? But whether it’s a green screen or a set, it all looks cheap. That might pass if you’re watching something on SyFy, but a summer tentpole needs to at least look extraordinary.

The film it reminds me of most is Tim Burton’s Planet of the Apes reboot from 2001. Like that movie, I would have loved this as a kid, but now it just comes off as a dull retread of every sci-fi film that came before it. And like that movie, After Earth is bad yet the director’s fingerprints are nowhere to be found. Lucky for them, I guess.

After Earth fails on just about every level, and everyone involved needs to think long and hard about whether this is the profession for them. They could make a documentary about it called After Film and I guarantee it would be a lot more interesting than this turd.

This entry was posted in Film, Reviews and tagged after earth, jaden smith, will smith, zoe kravitz. Bookmark the permalink.